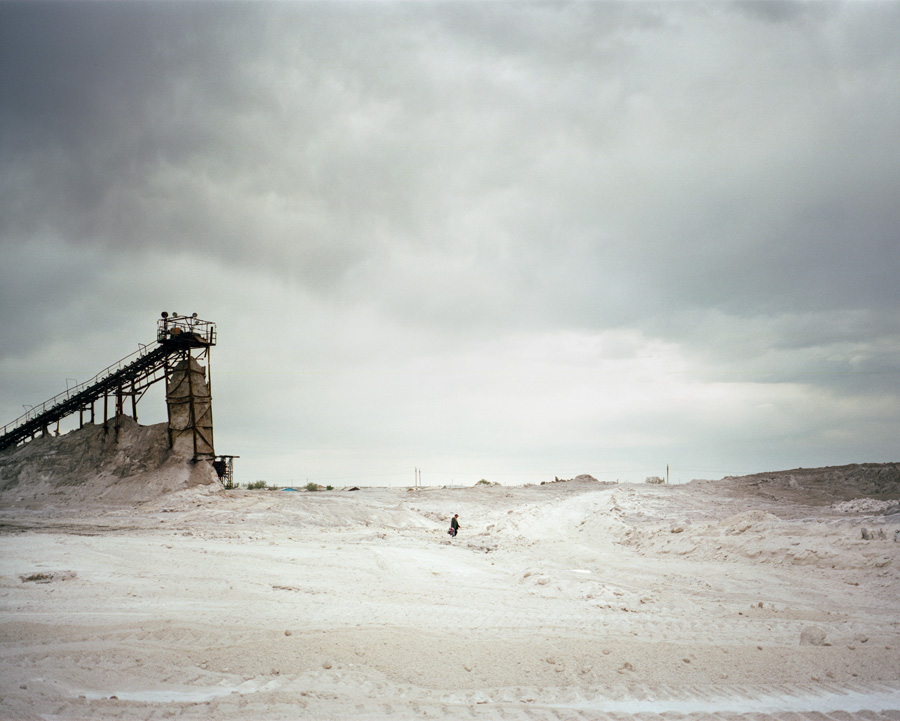 A rusting conveyor belt dwarfs a man crossing the salt mine that used to provide employment for the surrounding area. Although the industry has ground to a halt since the collapse of the Soviet Union, it is said that the spot where he stands was once covered with a 300m high mountain of salt. 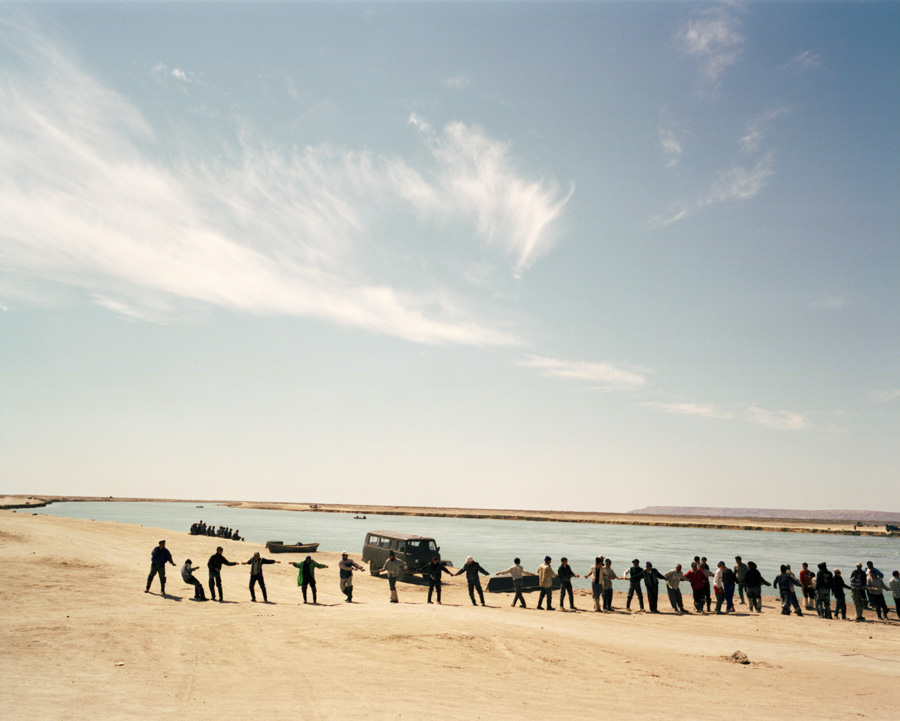 In the middle of the vast, arid region between Kazakhstan and Uzbekistan lies the Aral Sea, a land-locked body of salt water. Once home to hundreds of species of fish which supported nearby communities for centuries, the sea was almost irreversibly drained during Soviet rule.

In “The Virgin Lands Project”, Soviet economic planners decided to divert the three rivers that feed the sea to irrigate this arid part of the Soviet Union for cotton, rice and melon cultivation. Soon, the water level started to fall and the surface area contracted. By 1988, the Sea held a mere 20% of its original volume. Towns and fishing communities such as Aralsk were left miles from the sea shore, leaving the local people jobless and desperate.

The world woke up to this ecological disaster decades later, once the Soviet Union had collapsed, and satellite images showed a sea at 10% of its original size. Despite predictions that it would disappear altogether, the World Bank, together with the Kazakh government, funded the construction of the Kokaral dyke in 2005, which was designed to replenish the Northern section of the Aral Sea.

Though the surrounding area remains painfully depressed, the Northern part of the sea is rising, and quicker than expected. Men who had long given up hope of continuing in their traditional livelihood now congregate at this remote dyke, which acts as a funnel, concentrating their catch. Most camp here in the arid desert for the three-month season, fishing both day and night.

Though their catch is by no means reliable or plentiful, their almost biblical tale has taken a miraculous turn, as this community, with no other means of income, are able to fish again. 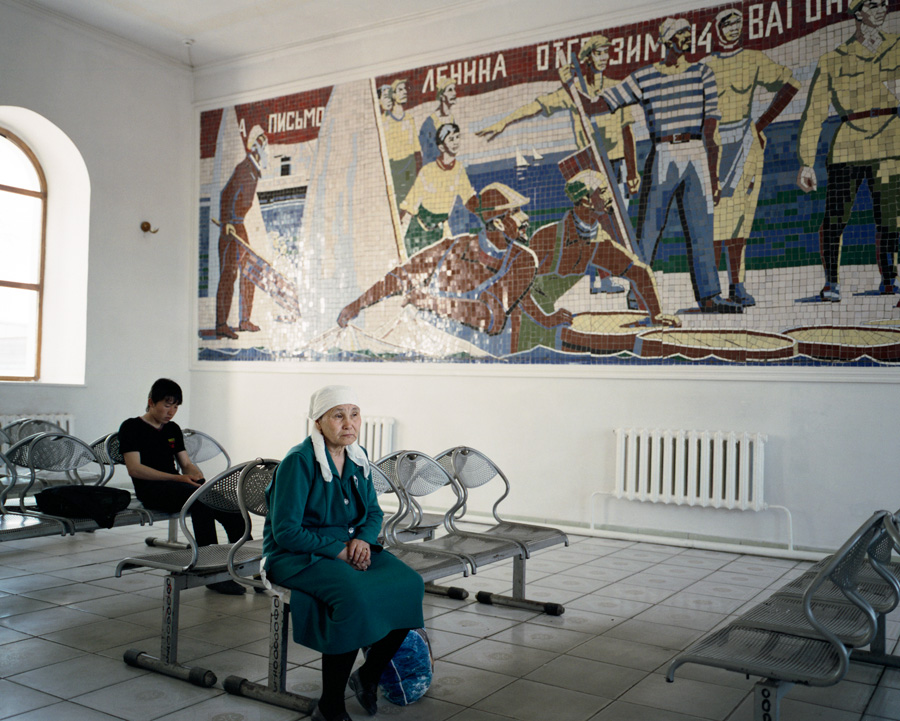 A woman waits at Aralsk train station. A mosaic on the wall behind her depicts times gone by during Soviet rule, when fish and jobs were plentiful. 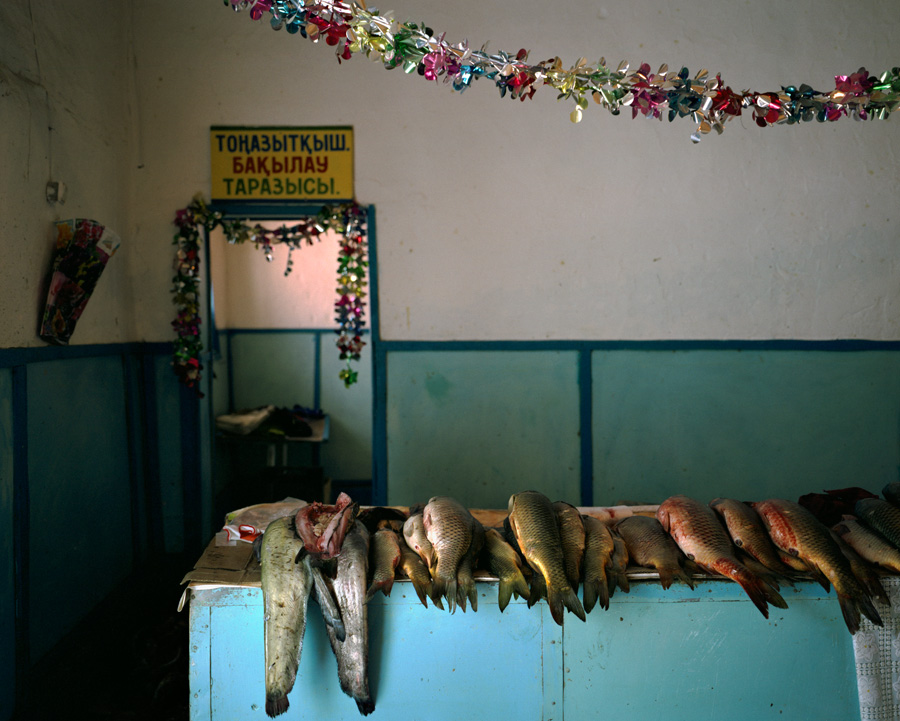 A fish counter in the Aralsk market. As the Aral Sea diminished, so its waters became dangerously saline, killing off 30 species of it’s indigenous fish. But as the water level slowly rises and new species have been introduced, fish is returning to local diets. 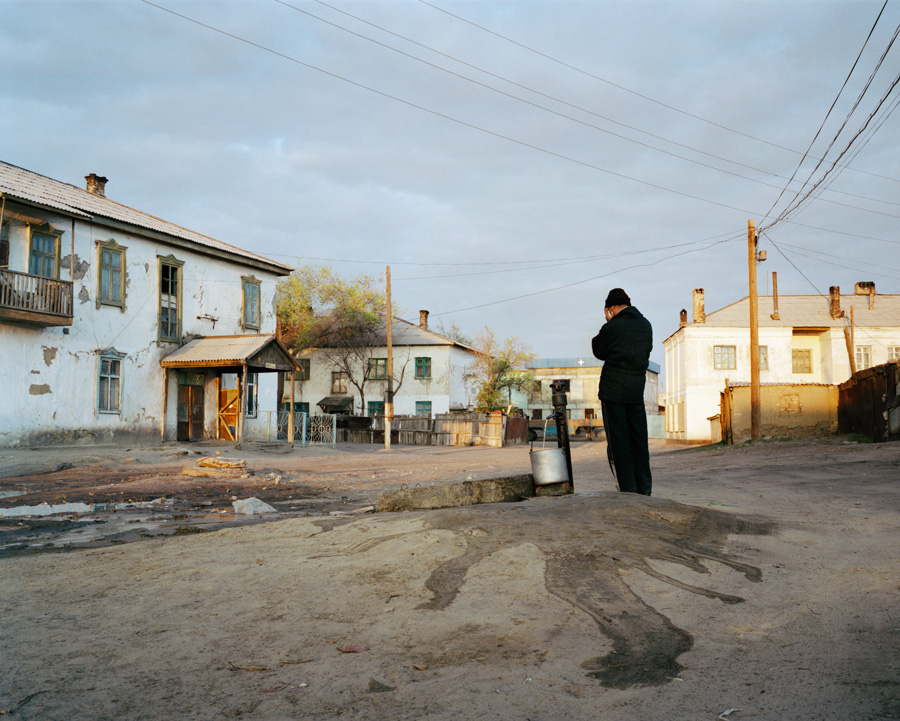 A man collects water from a pump, as the water supply in Aralsk has been down for three days. 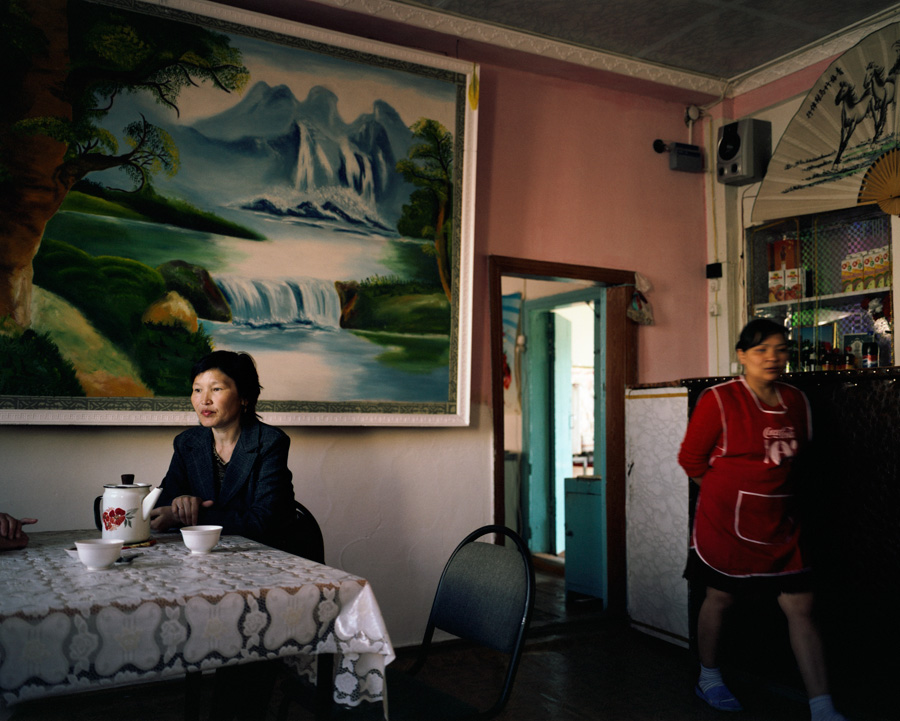 A primary school teacher drinks tea during her break at a nearby cafe in Aralsk. 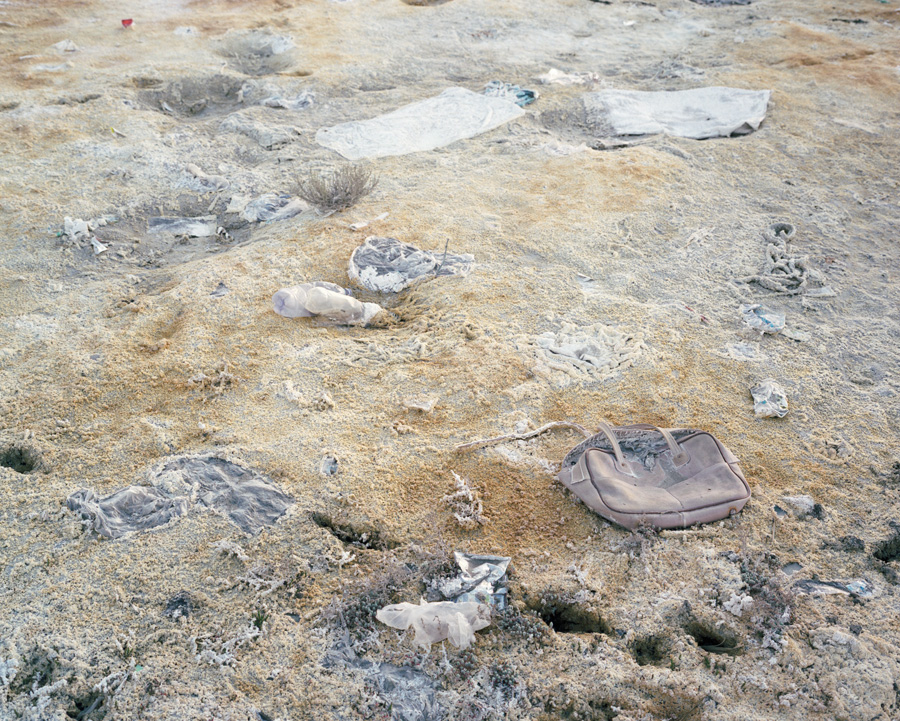 As the sea withdrew, it left huge plains covered with salt, and toxic chemicals carried from nearby munitions factories. Consequently, local people still suffer from a range of respiratory problems. 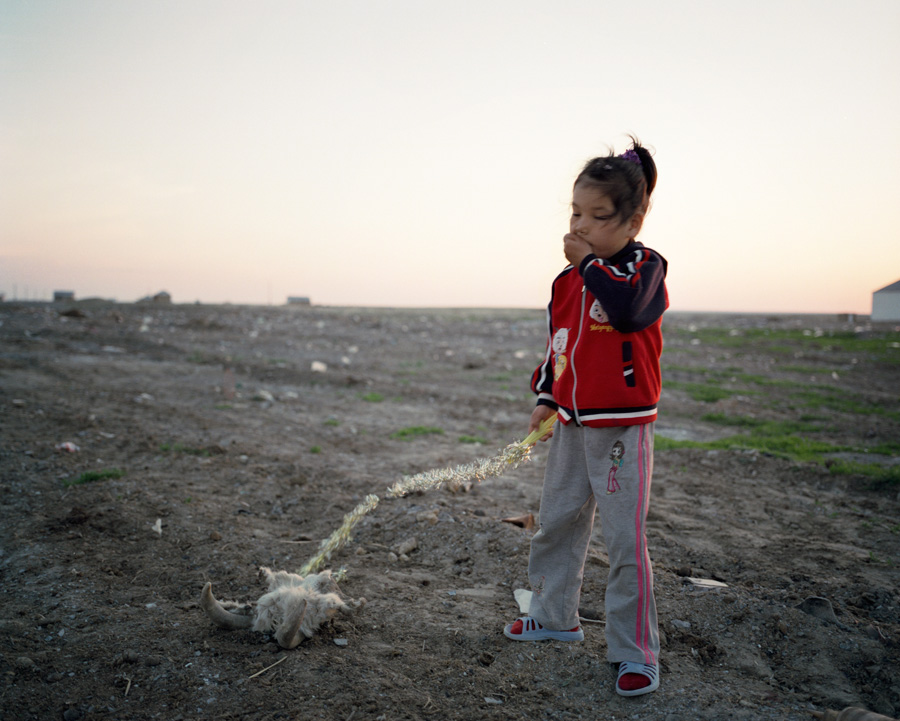 A child plays with a piece of tinsel in an area of parched land that used to be the seabed. A decomposing camel skull lies by her side. 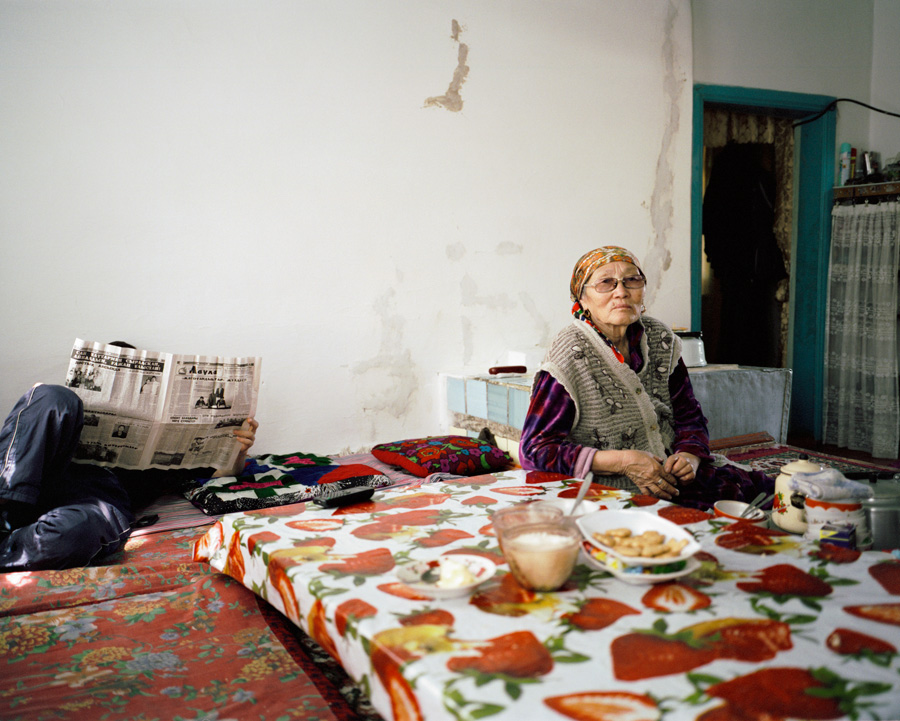 Oltinoy, whose late husband worked at the fish processing plant, watches television while her 41 year old son reads the paper. Each day he waits for a call to work as a driver, but he’s been waiting for months. 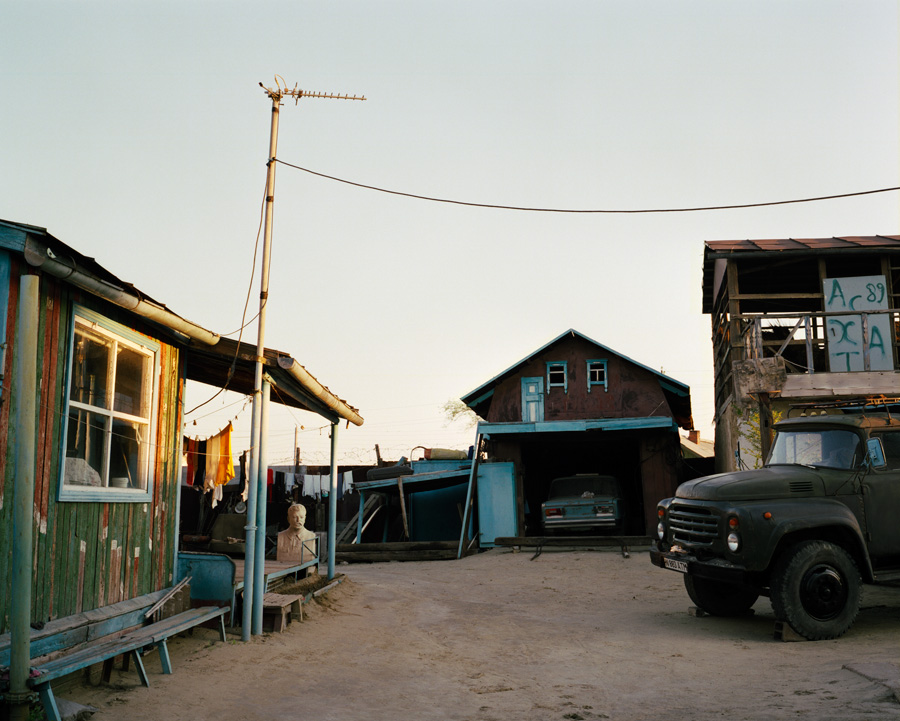 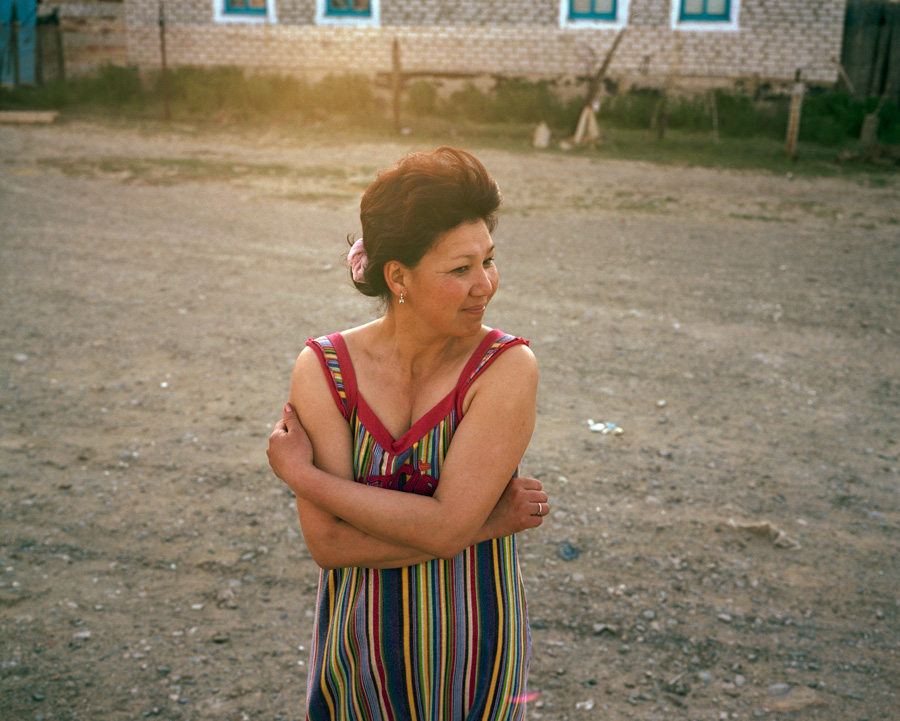 A woman looks out to the dried up harbour. 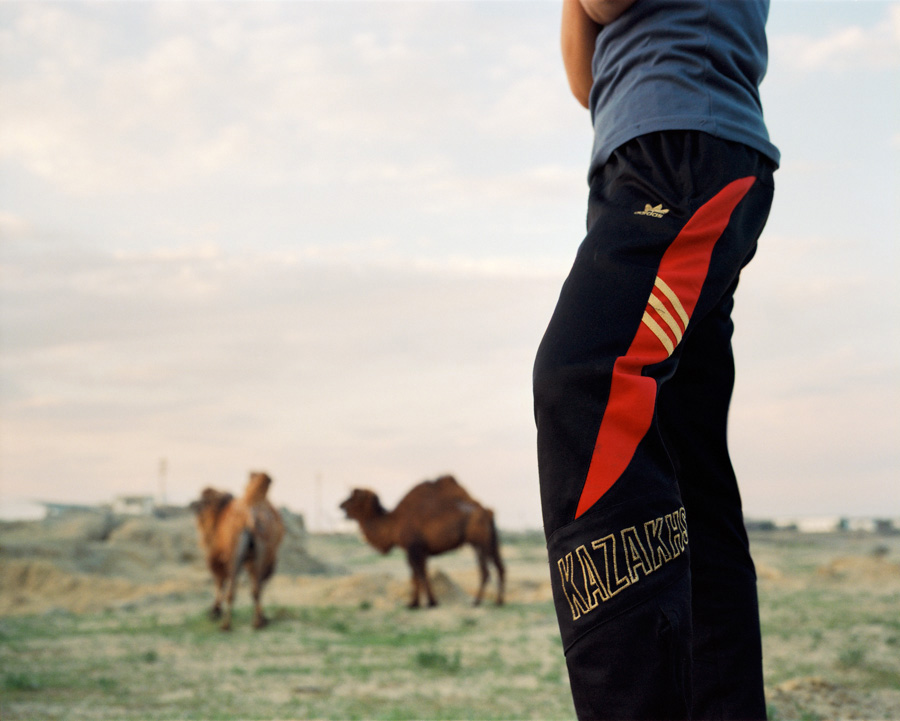 A boy walks past camels on what used to be the seabed of the Aralsk harbour. 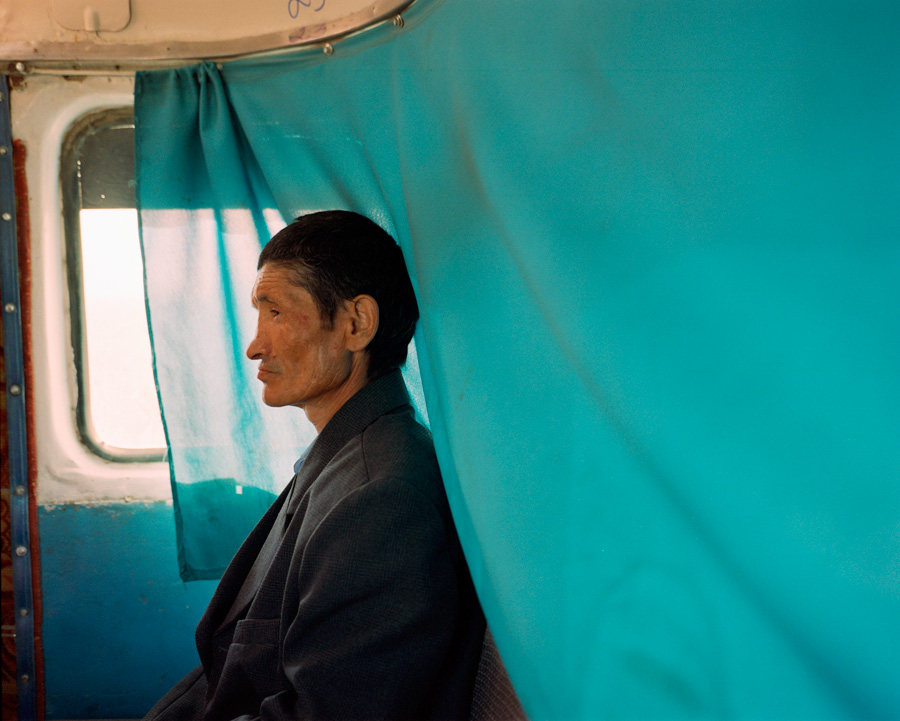 A man takes the local bus into Aralsk from his nearby village, which used to border the sea. He’s put on a jacket, as he’s looking for work. 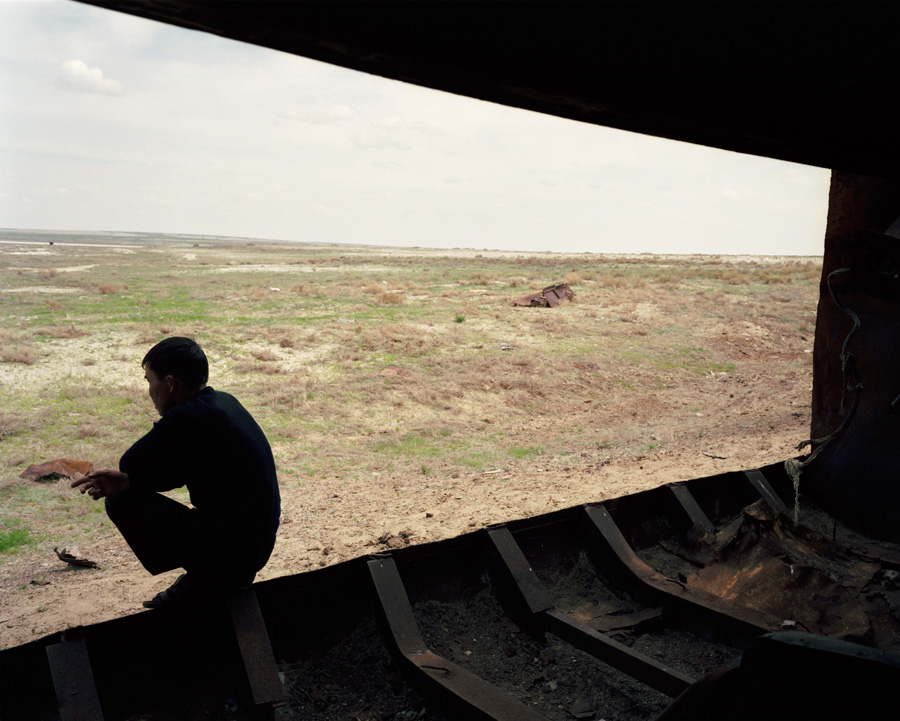 A local fixer perches inside a rusting ship's carcass. He has been asked to find alternative locations, as the famous landscape of beached tankers that once populated this area, have all but disappeared. 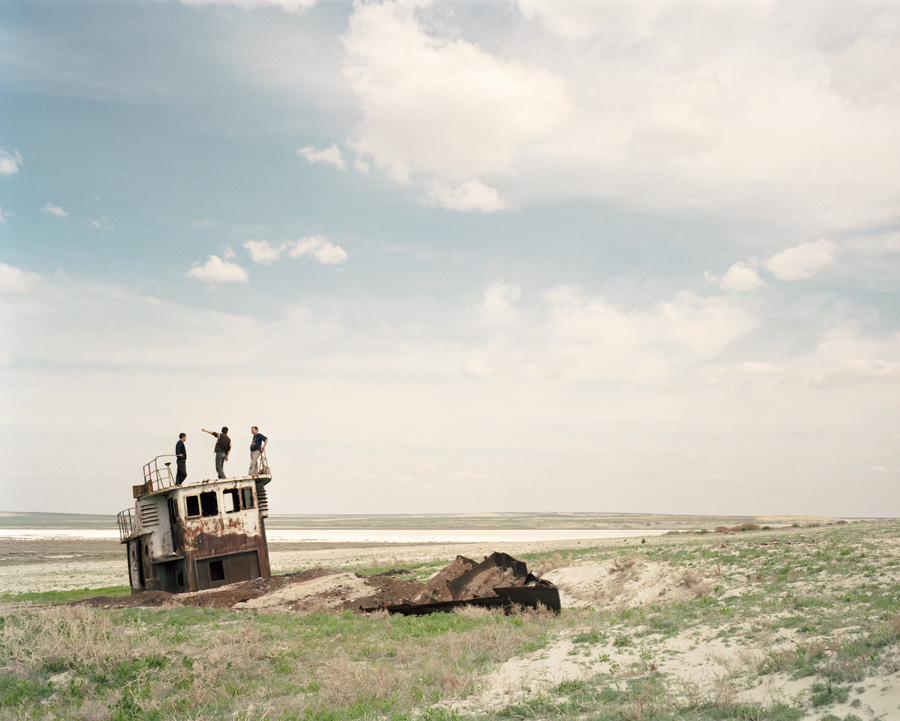 The sight of rusting fishing boats stranded on the exposed seabed is what people most commonly associate with the Aral Sea region. But in difficult economic conditions, even the tombs of this ‘ship graveyard’ are disappearing, as impoverished local scavengers sell the metal on to Chinese traders for $100 a ton. Here, a film crew arrive from the capital, and of the 12 ships they expect to find, only four remain. 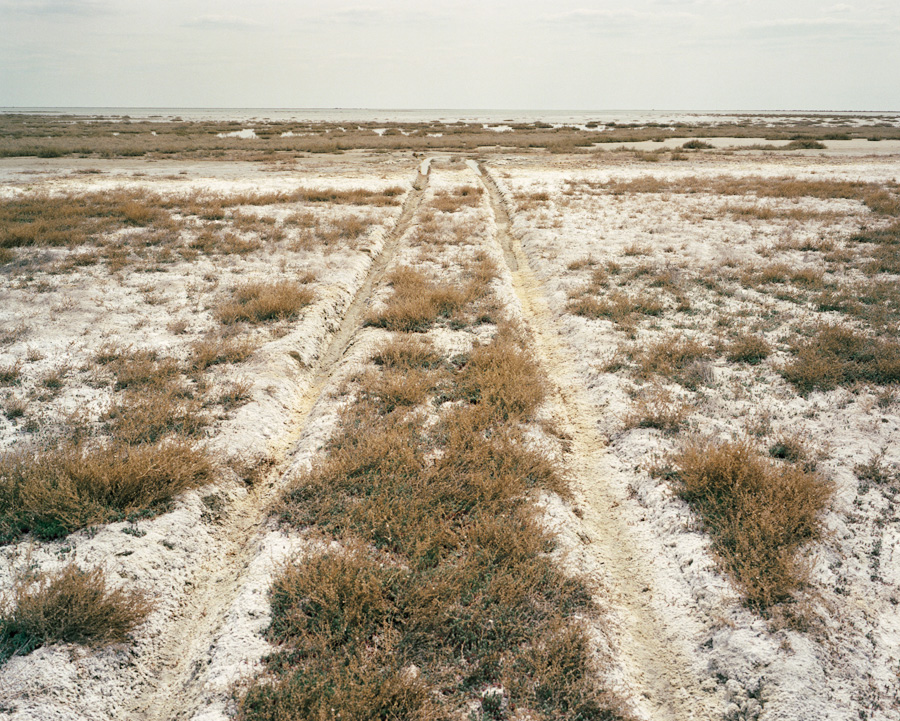 In a state of flux, the Aral Sea shore currently lies 25 km from its main port. The earth has turned white as a salt crust has formed on its surface. 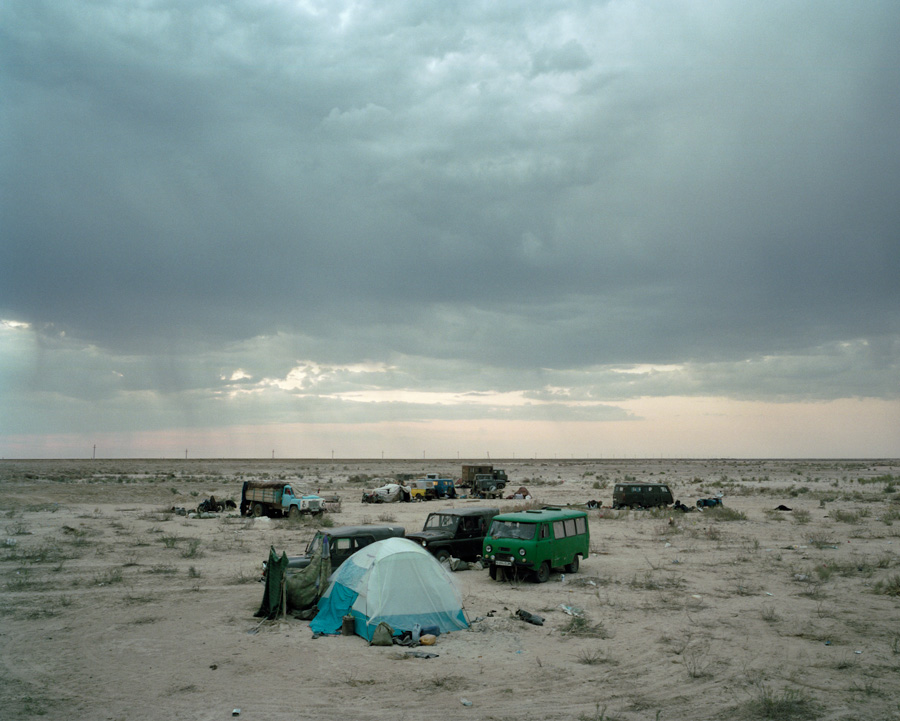 A small settlement of trucks and tents collect in a remote part of the Kazakh desert to work at the recently constructed Kokaral Dyke. Men come from all around the area to fish here, camping for months at a time to profit from the rising waters. 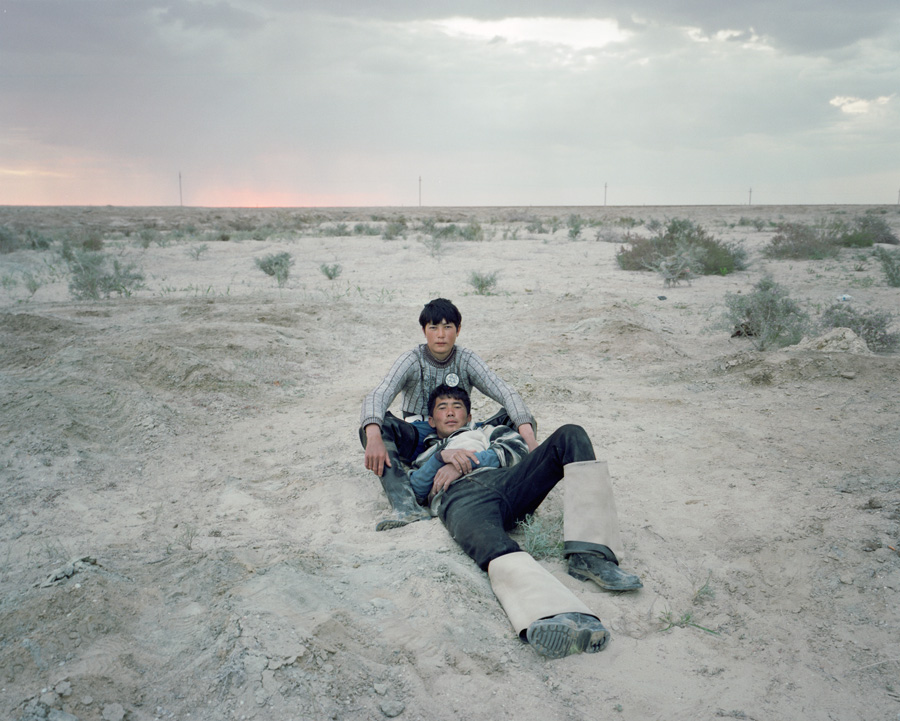 Two young fishermen lie in the desert as dawn breaks. A whole generation were rendered jobless with the collapse of the fishing industry in the Aral Sea. Now, though opportunities are limited, and pay is meagre, they are again able to do what their fathers did. 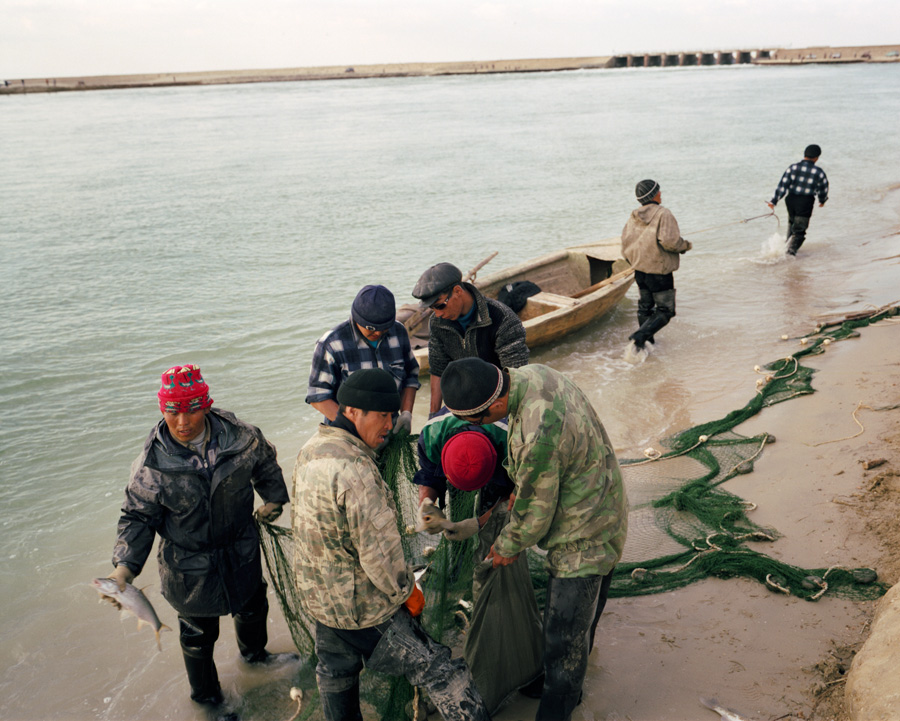 Fishermen use nets to collect their catch at the mouth of the Kokaral dyke. The construction of a 13km dyke and dam at the foot of the Northern Aral has caused water levels to rise 12 metres from its lowest level in 2003. And with the increased water, its salinity has dropped, meaning that fish are now in sufficient numbers to make fishing viable. 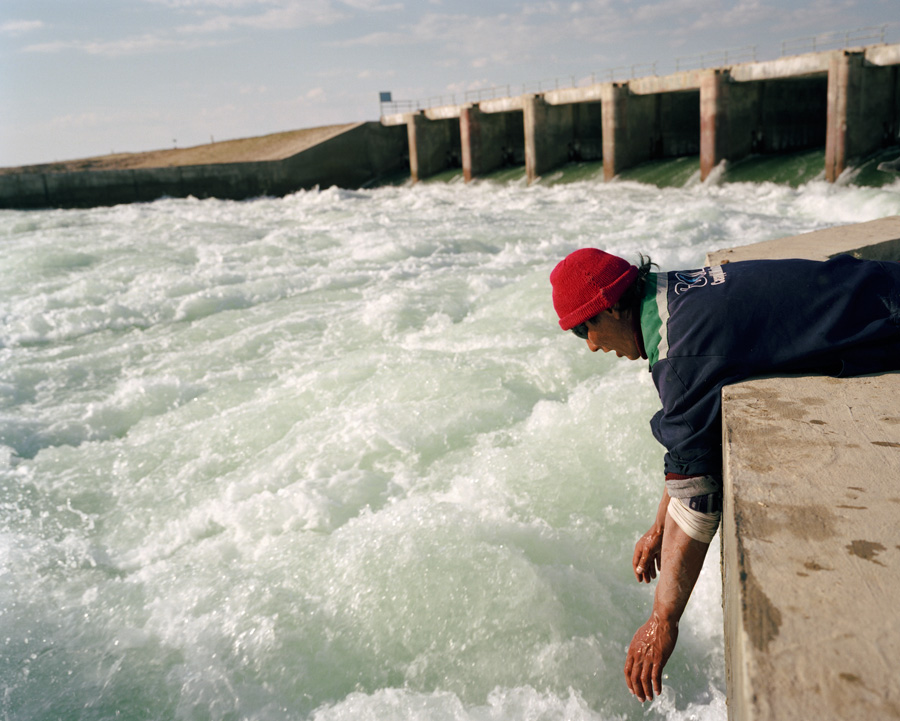 A fisherman lies by the newly constructed dam, feeling the great volume of water rush through his hands.

A group of fishermen form a line to haul in the nets, now thriving with fish. 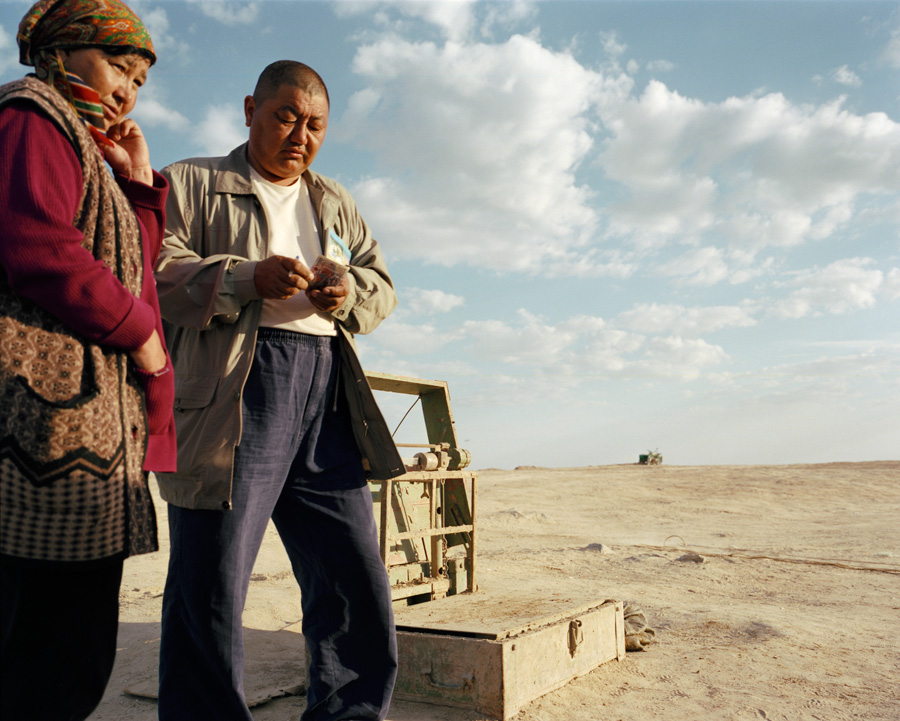 A fish dealer visits the encampment each day, to weigh and buy the fishermen’s catch. 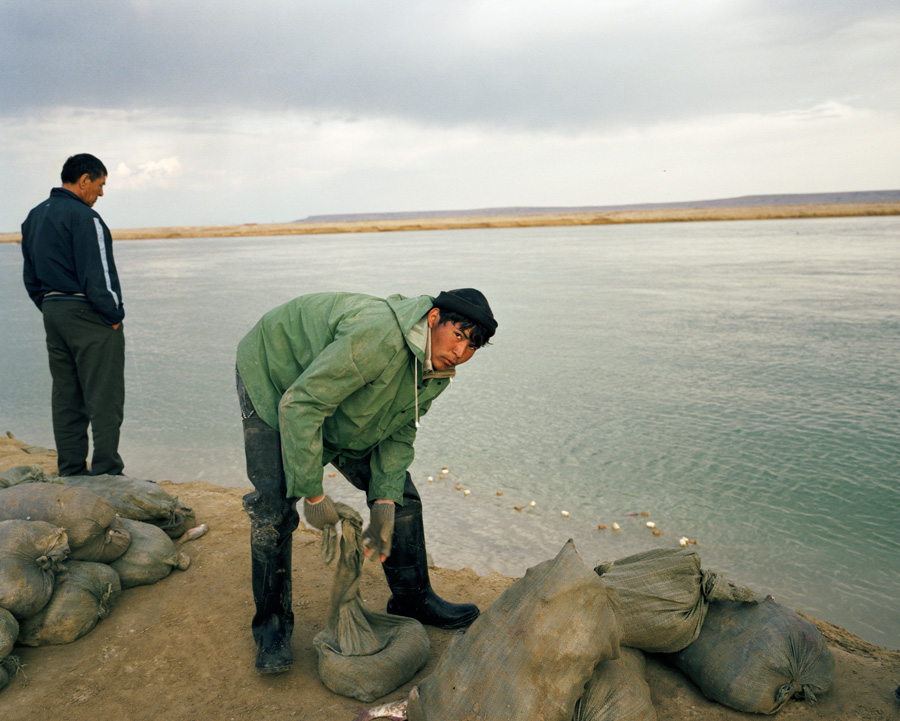 Fish is loaded into sacks on the banks of the dyke. 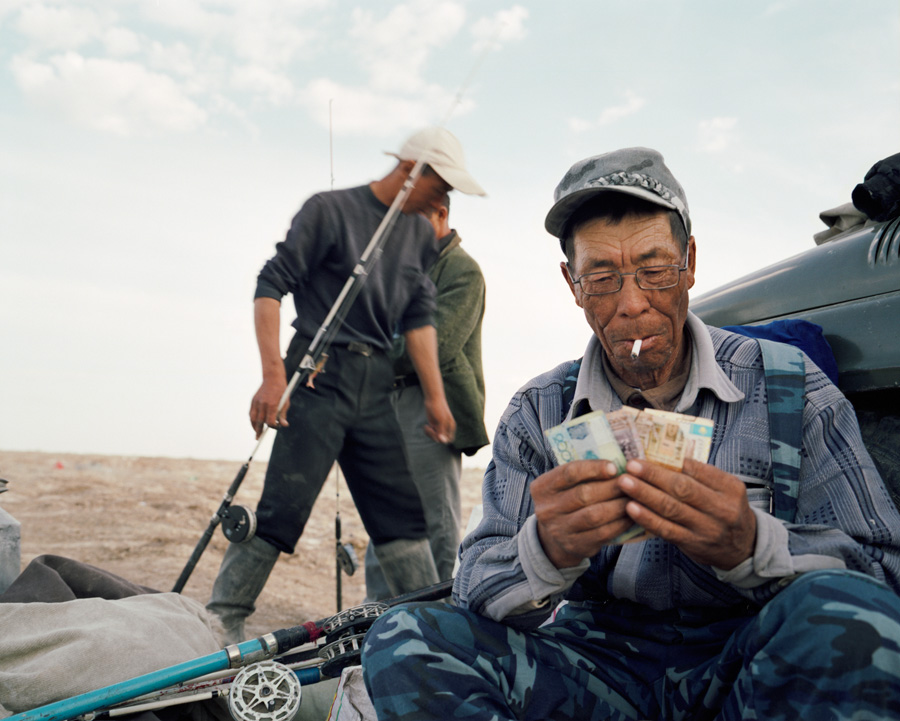 A fisherman counts his earnings, as his two sons prepare to go out on the next catch. 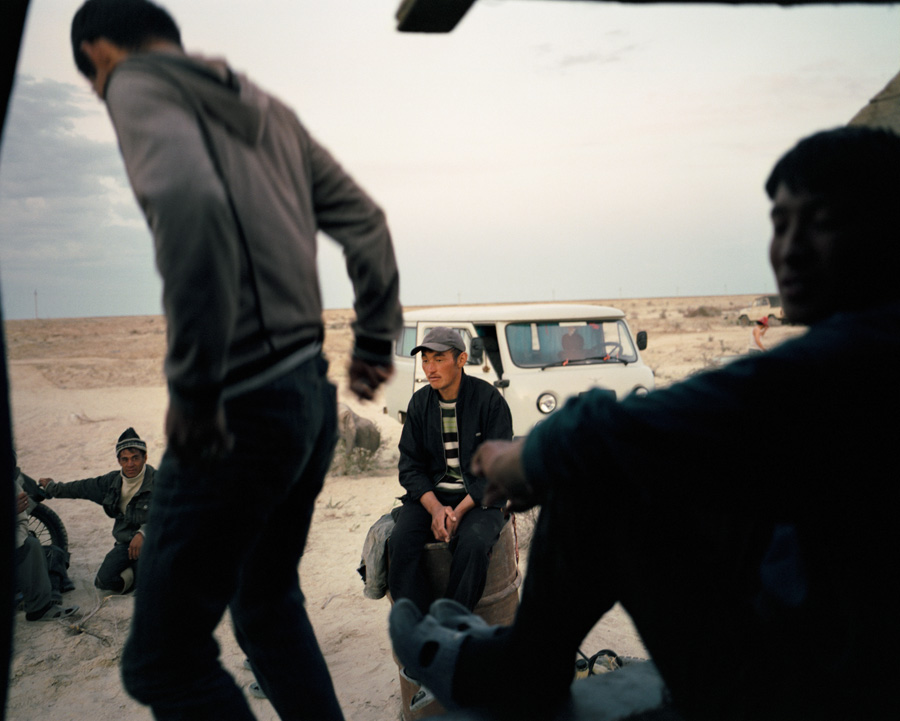 Back at the encampment, a group of the younger fishermen lounge about in the back of their van and wait to be called back onto the water. 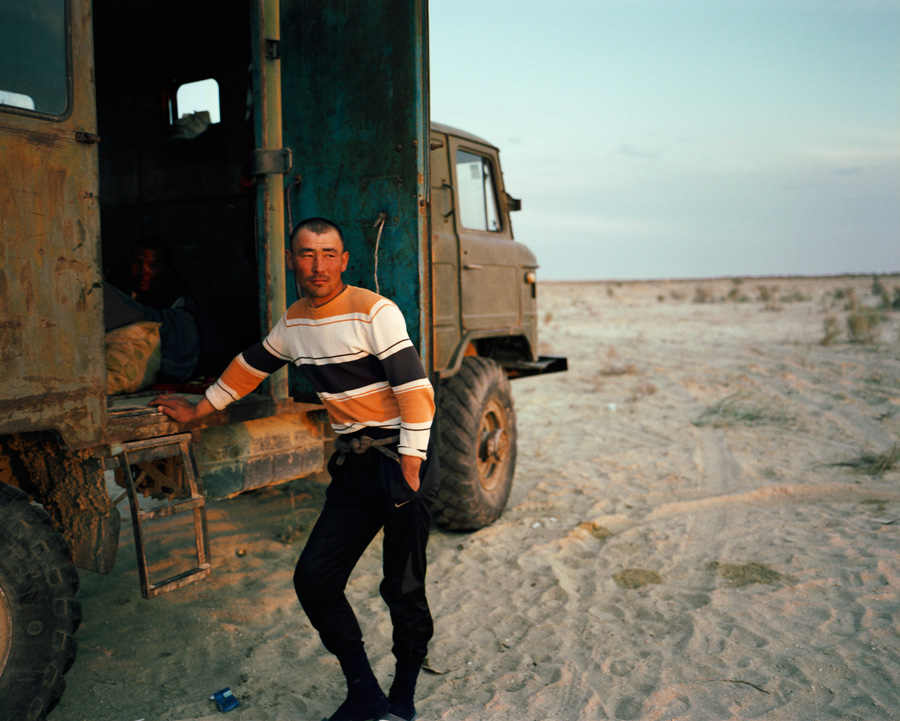 A pause before the night shift.