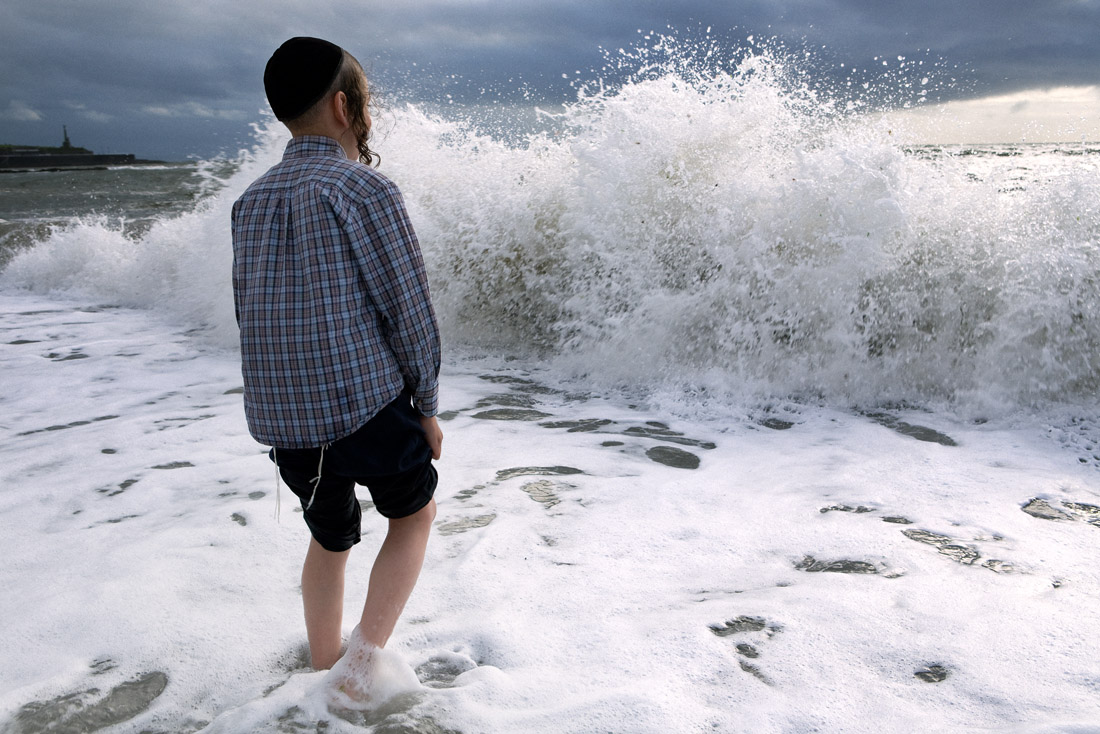 A young boy plays at the water's edge. In 2008 Hasidic man drowned in Aberystwyth, unable to swim back to shore. Some of the Jewish community were upset by how slow and reluctant the local emergency services seemed, attributing their half-heartedness to the fact that the man was Jewish. 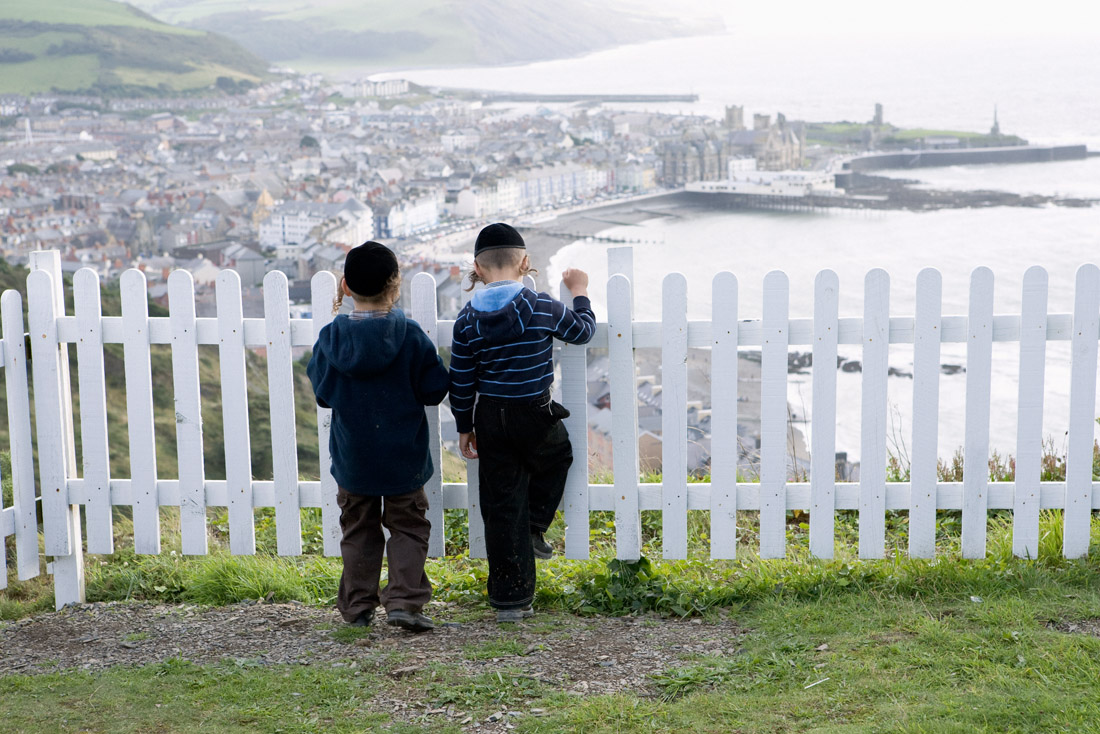 For over 20 years, British orthodox Jews have been holidaying in the Welsh seaside town of Aberystwyth for two weeks every summer. Each family rents a small house in the empty student accommodation on the hill and a large yellow and white striped tent is erected on the campus as a temporary synagogue.

They arrive in large groups, followed by huge removal lorries, bringing all their possessions from home, including children’s bikes, cookers and fridges full of food. Around a thousand people make the trip each year and although the majority of families come from North London, there are many others from further afield - from Manchester, continental Europe, Jerusalem and New York.

The orthodox Jewish community has been going to Aberystwyth instead of other traditional English seaside towns such as Blackpool or Brighton because it is a quieter, less popular destination and is surrounded by rural beauty. Over the years, the community has developed a real affection for the area with the accumulated memories of annual family holidays.

After morning prayers, family groups rattle up the funicular “cliff railway”, push buggies along the pier and spend hours in the playground by the ruined castle. The visual landscape of Aberystwyth is briefly transformed. Men in long dark coats and brimmed hats wander along the promenade as young families set up on the beach. Fully clothed even when swimming, the sight of these large family units together on the beach rekindles the Victorian notion of traditional British seaside holidays. This is in marked contrast to the rest of the beach goers – dog walkers, hobbling pensioners, single parent families and 20 something students still up from the night before.

Despite the long-standing relationship with the town, there is little contact or exchange between the Jewish community and local people. On one occasion a visitor enquired at the tourist office, “Why are there were so many people in Welsh national dress on the beach?”. Another time, another asked, “When do the Arabs arrive?” Perhaps they get relatively less attention than they would elsewhere, as the town is so isolated, with a small influx of tourists each year. However, multiculturalism has only come to rural Wales very recently and although moments of confrontation are very rare, they seem almost inevitable. In 2009, scraps of paper with swastikas were found littering the road near the student accommodation and a group of youths in the town centre chanted “Heil Hitler” as a Jewish man walked past. It caused a shock in the community, who have become very attached to their annual holiday on the Welsh seaside. 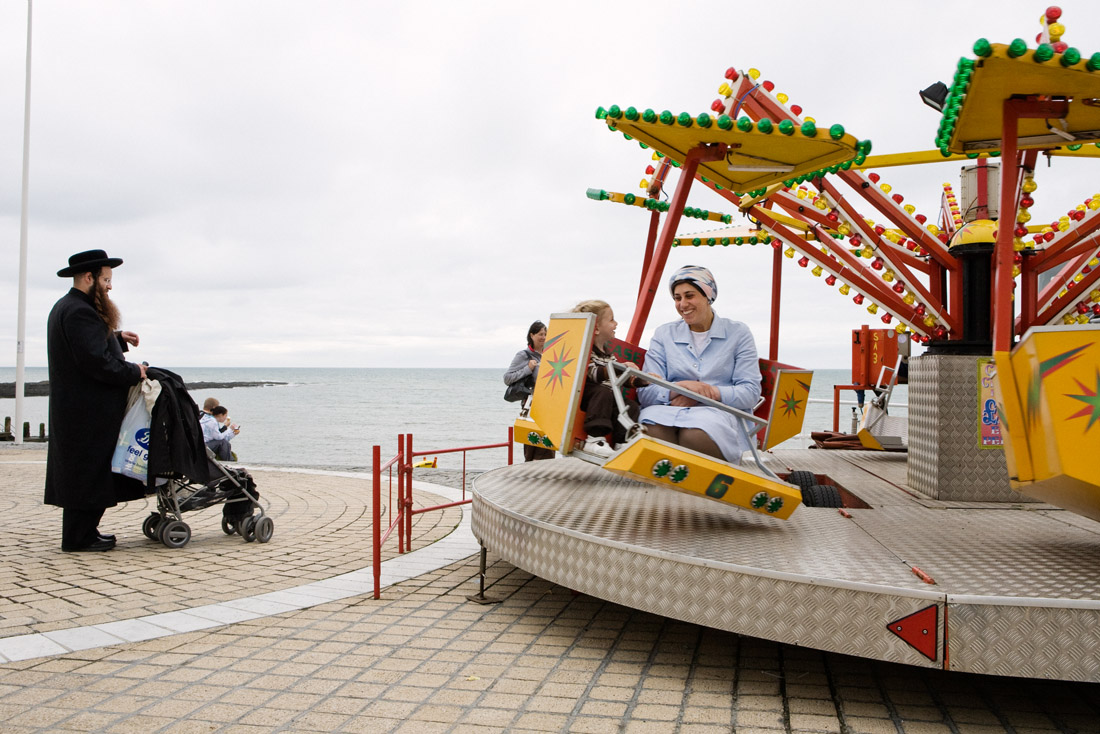 A Hasidic man minds his baby as he watches his wife and child swing round on the seaside ride. 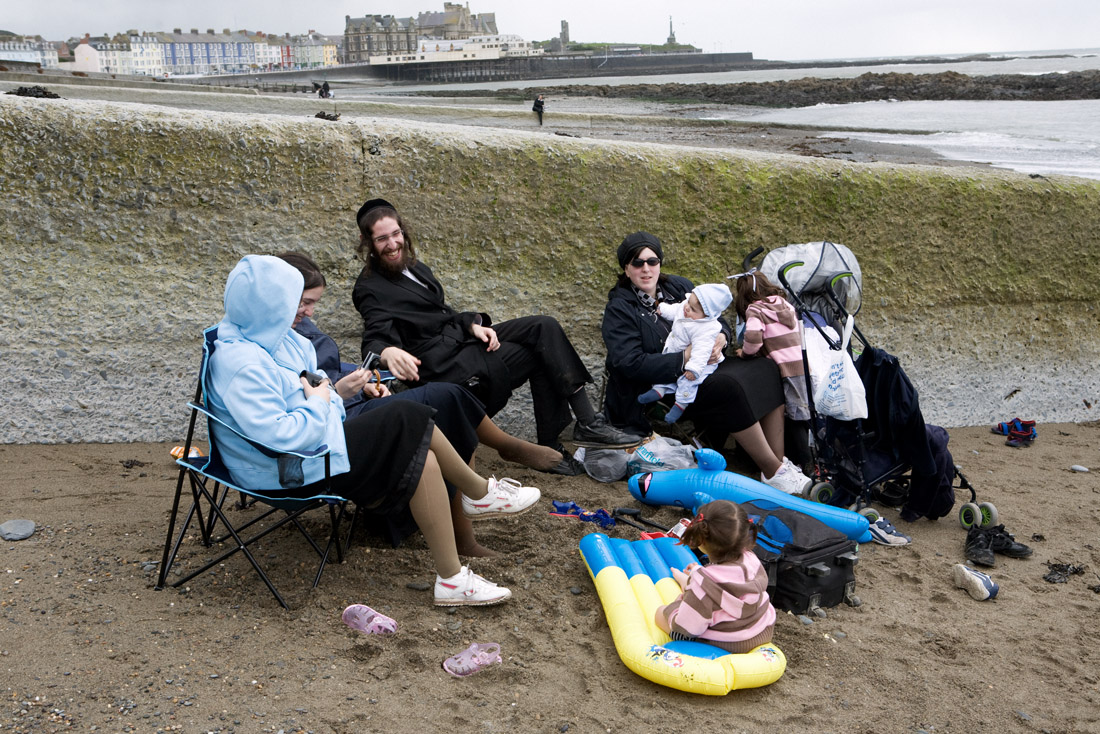 A Hasidic family relax on North Beach, as the clouds gather. 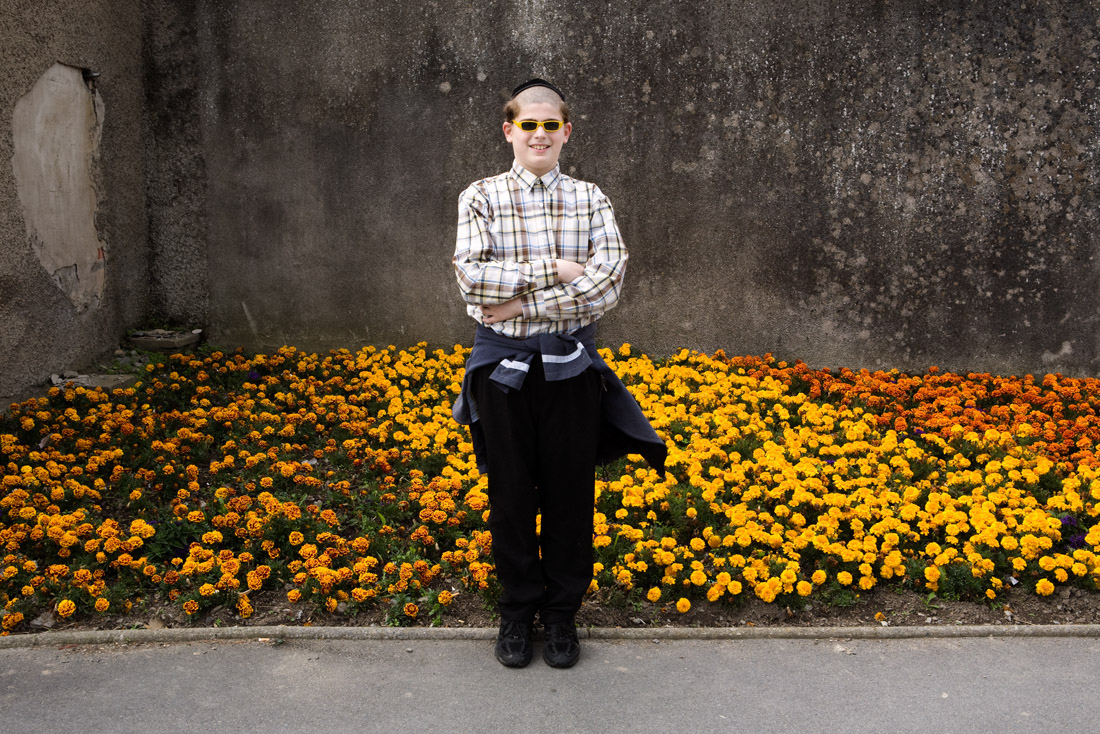 A boy poses in front of the municipal planting. 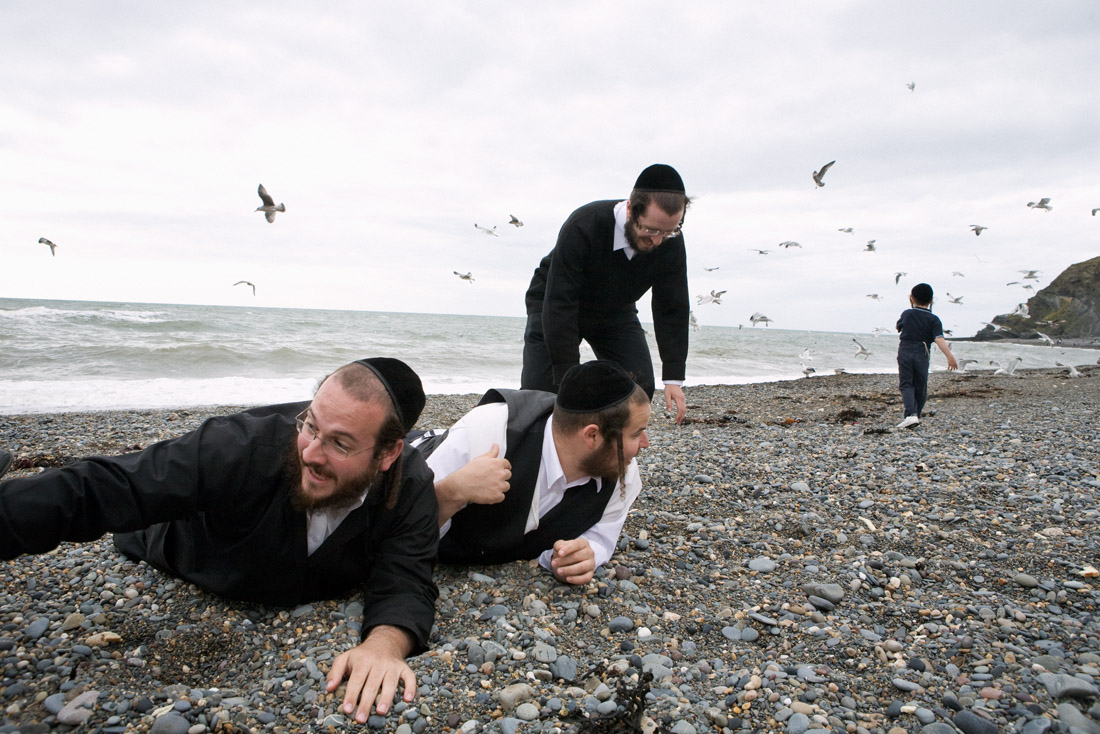 Having spent the last twenty minutes feeing the gulls, the men of the Stern family get ready for a group photograph. 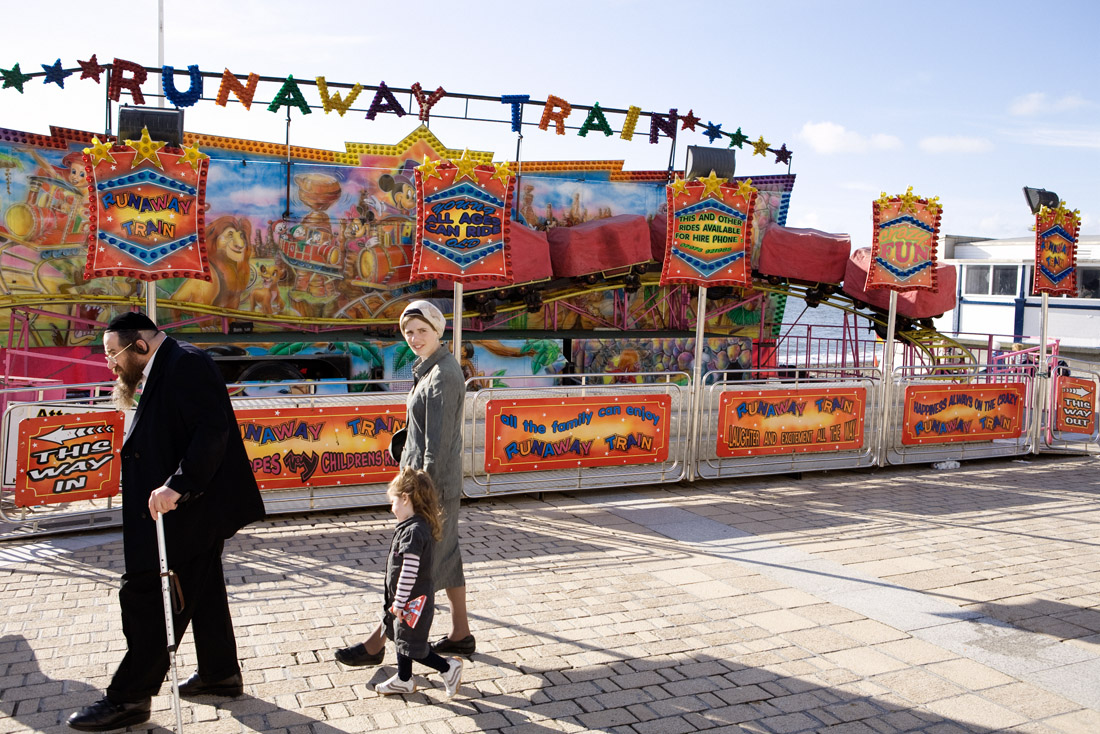 'Runaway Train' is one of three fairground rides that are installed along the promenade for the duration of the summer. 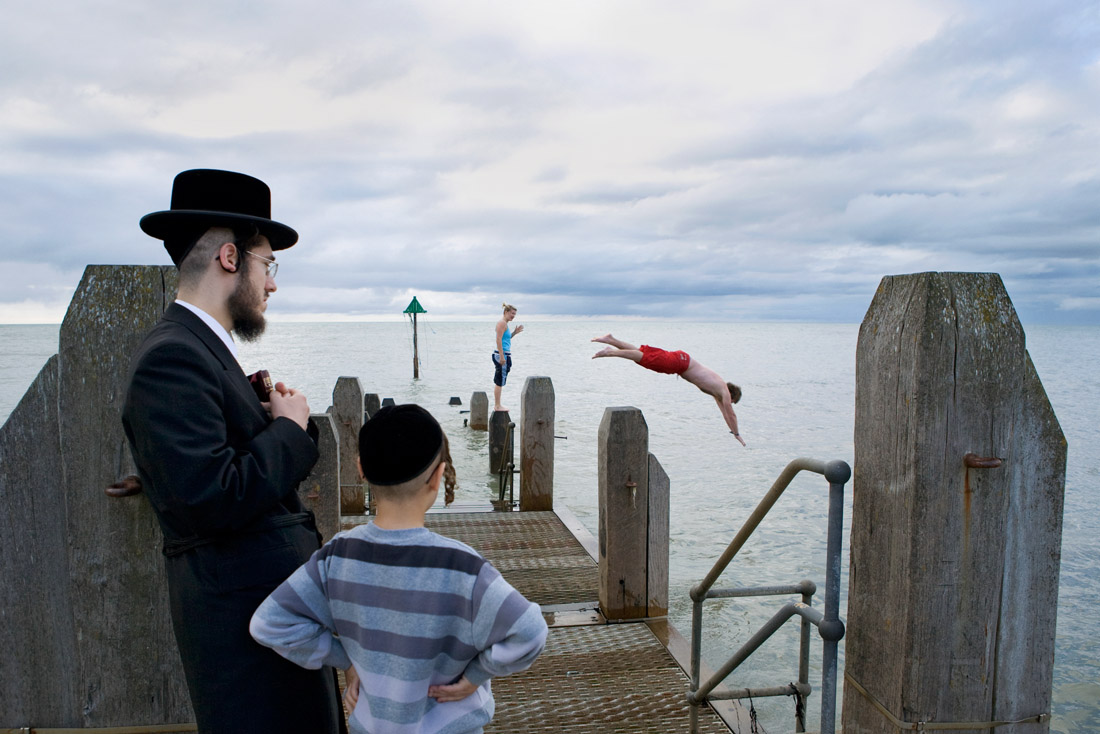 A Jewish man and his son watch a couple of young locals go for an afternoon swim. 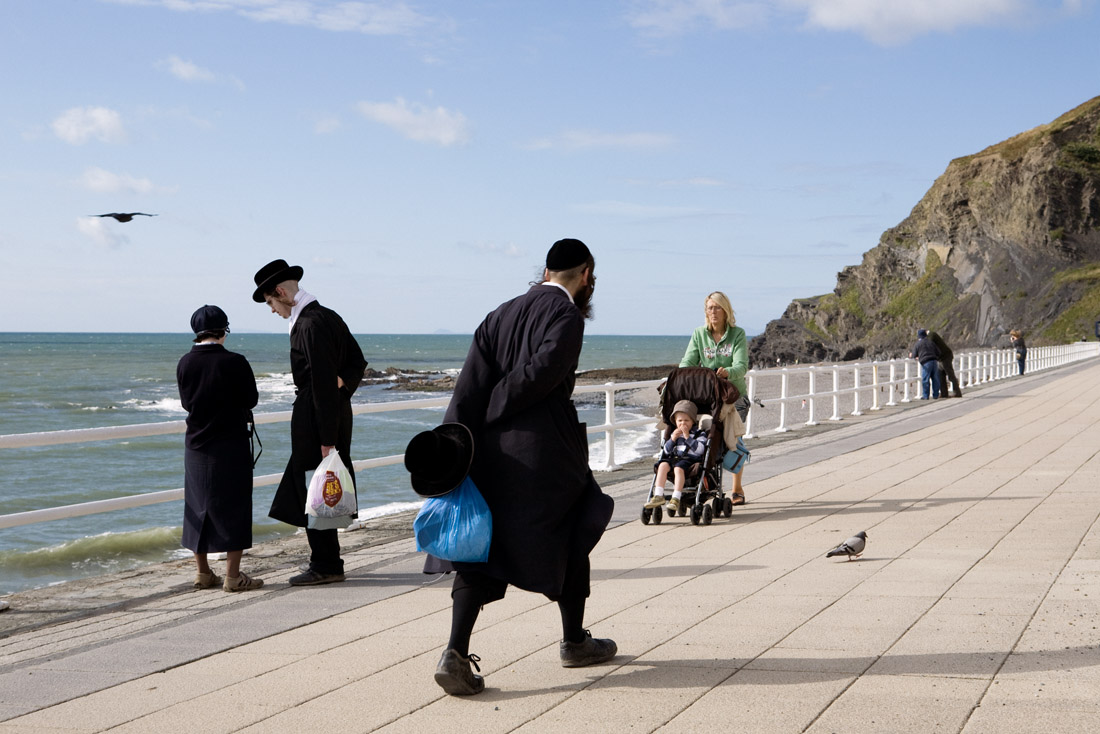 A daytime stroll along the promenade is enjoyed by both locals and visitors alike. 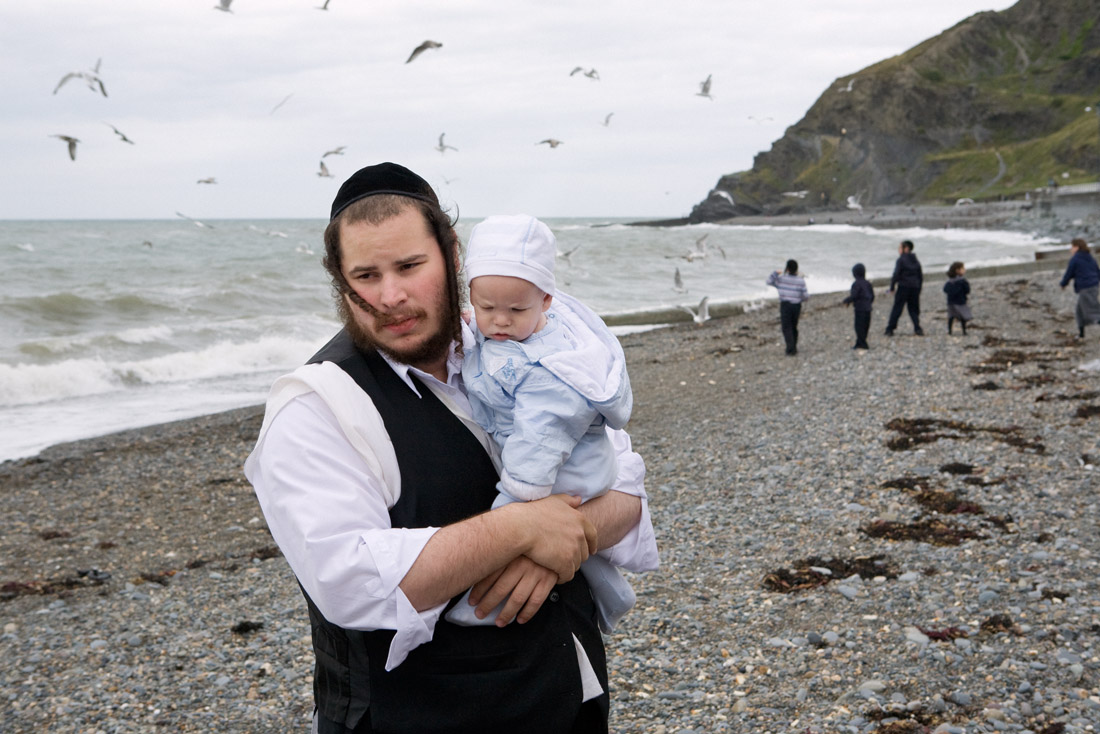 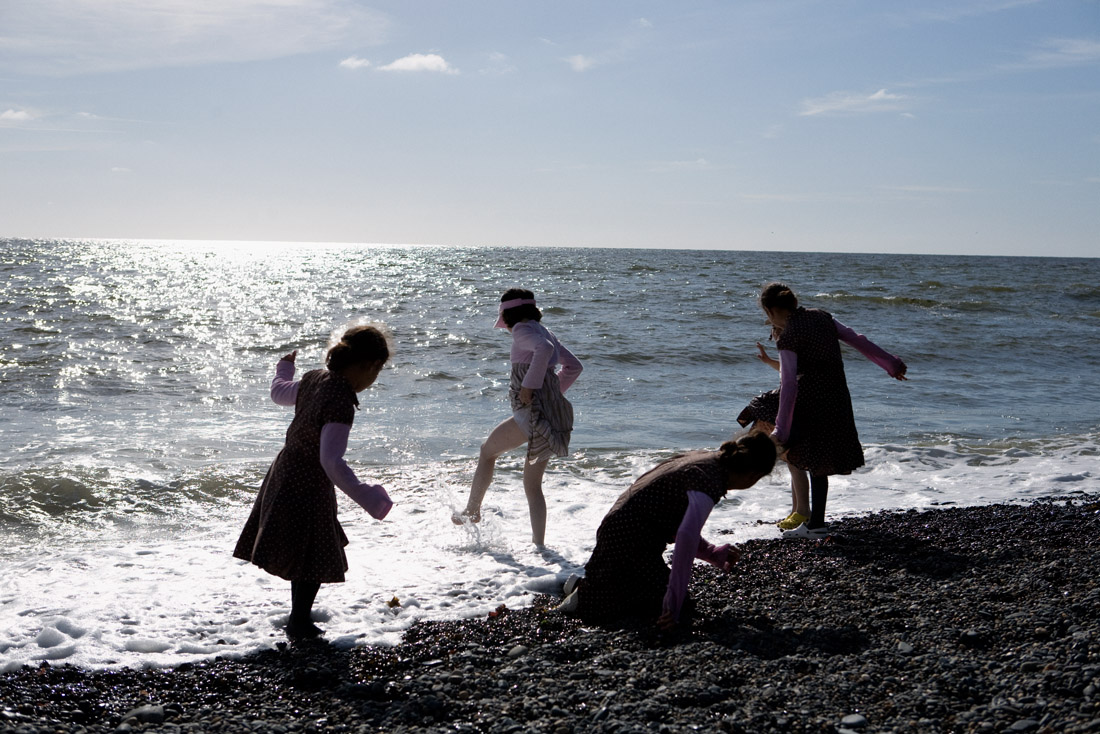 A girl plays bare legged at the waters edge. It is expected that Hasidic girls wear tights throughout the year, irrespective of the season. 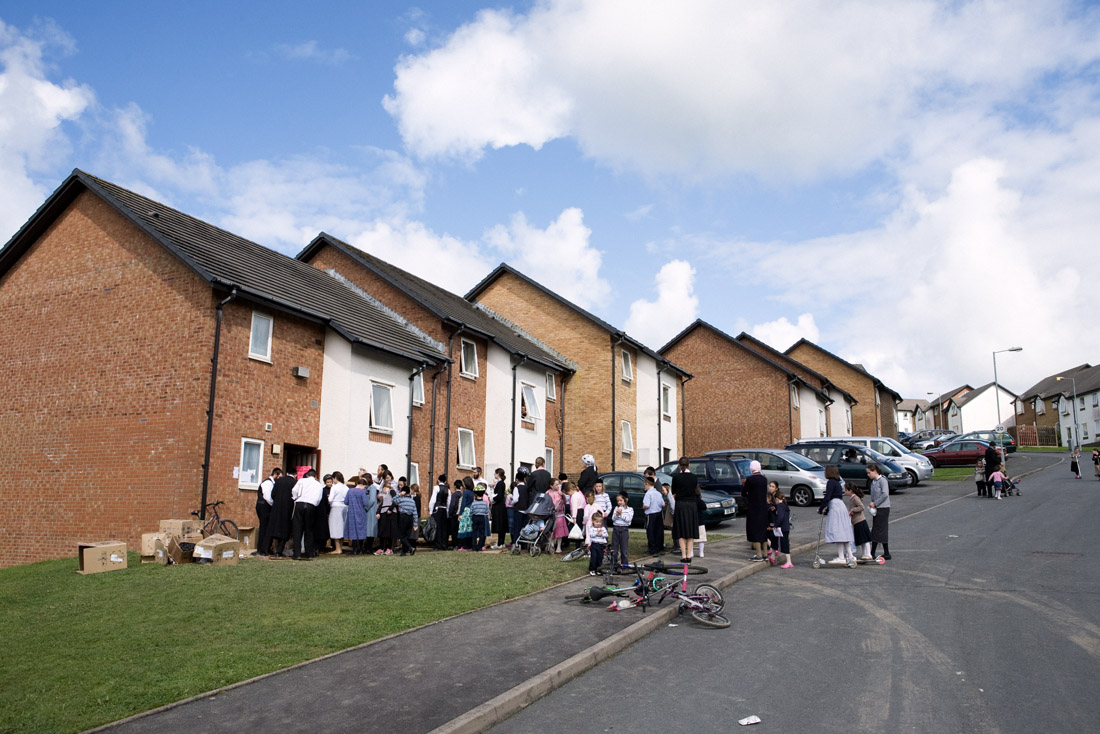 Orthodox Jewish families stay in the University accommodation at Pentre Jane Morgan. Every other day bread, milk and other supplies are brought from kosher shops in London and resold from one of the rented houses on the campus. 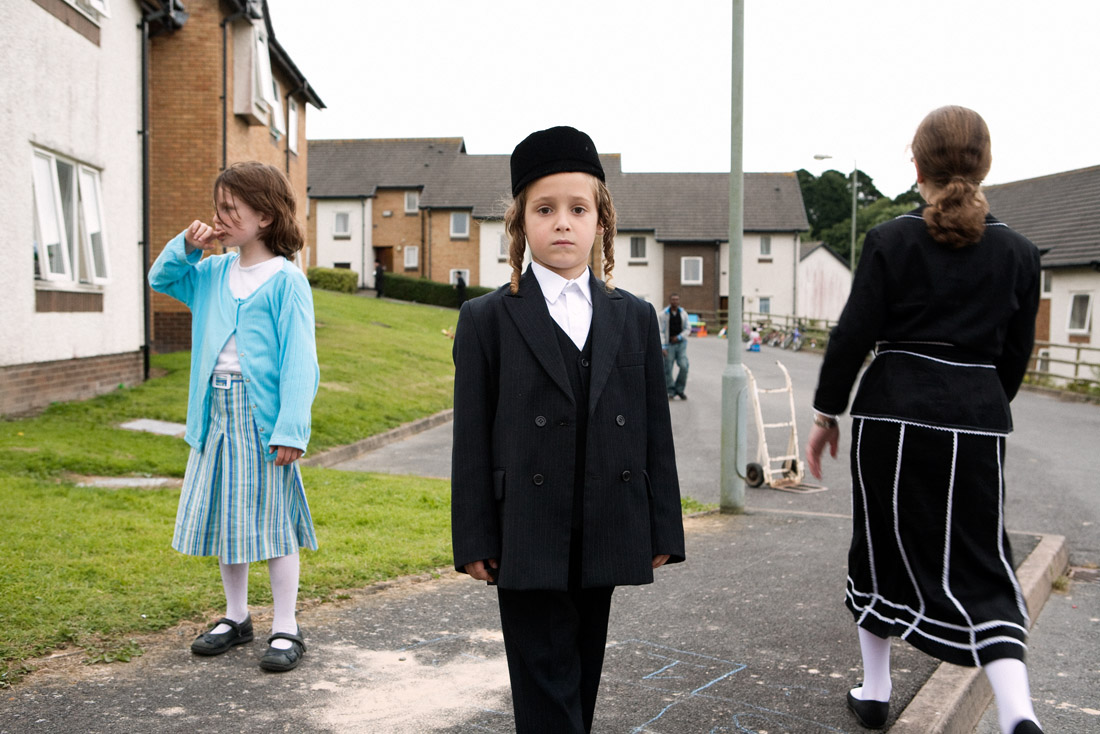 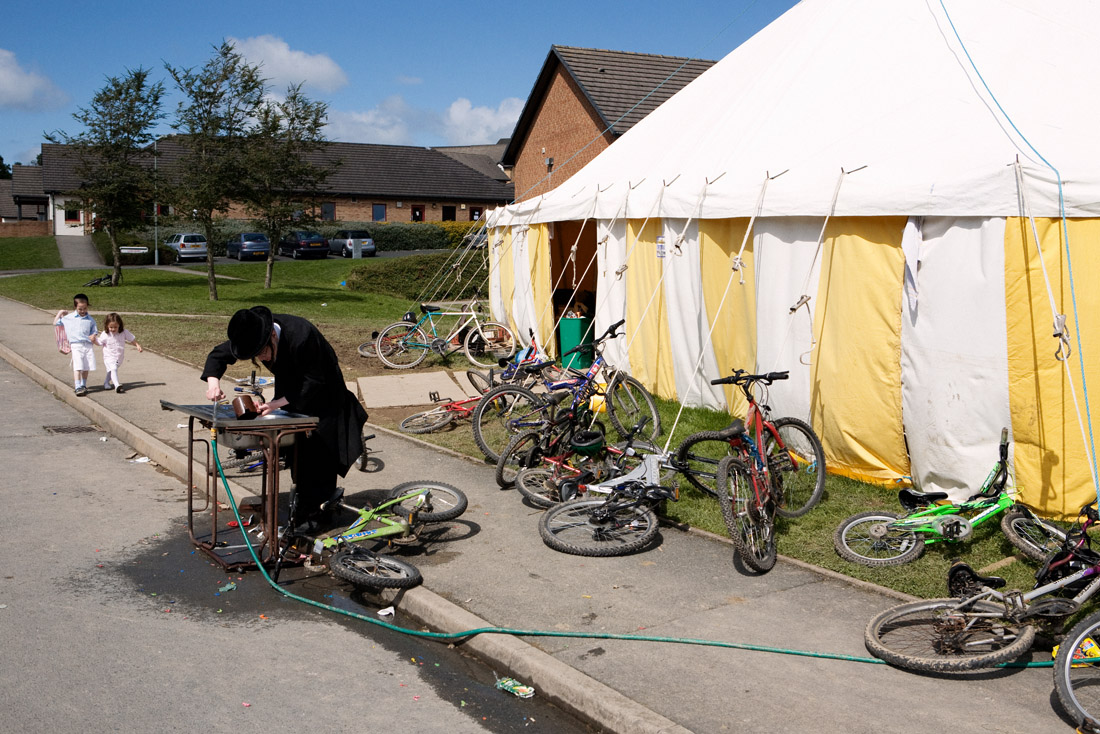 A man washes his hands before prayer, outside the temporary synagogue on the University campus. 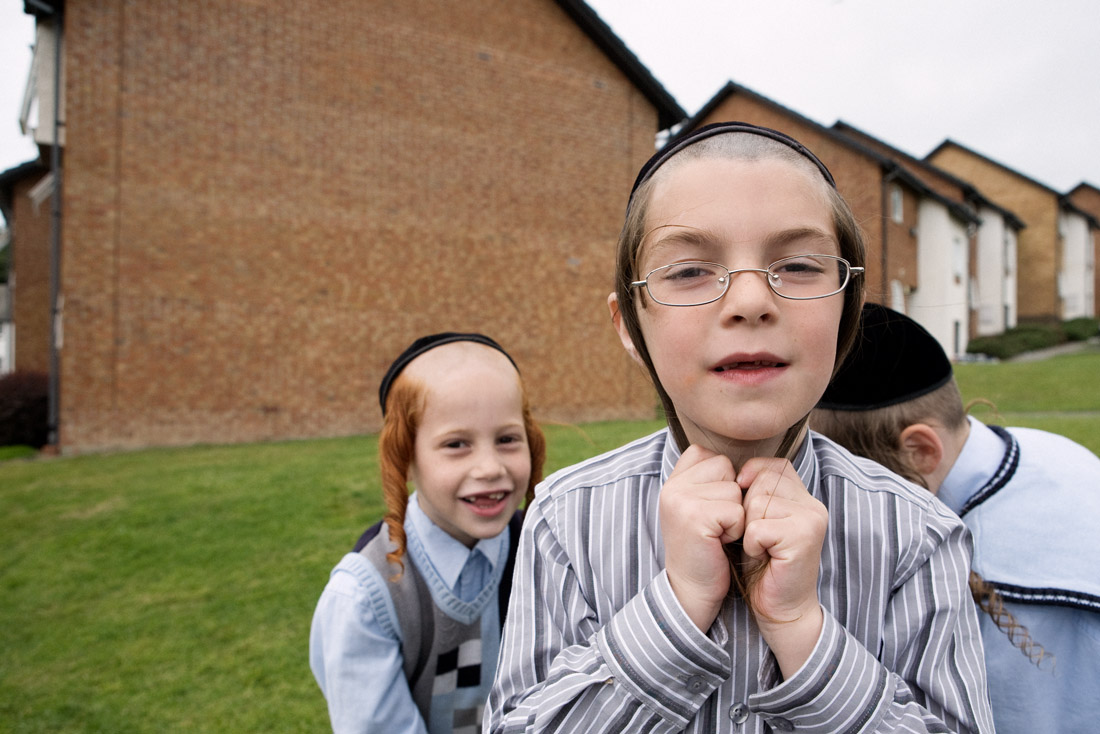 Calm before a fight. Discipline is deeply valued in the orthodox community. However, with an average of nine children per family, outbreaks of chaos are inevitable (and frequent). 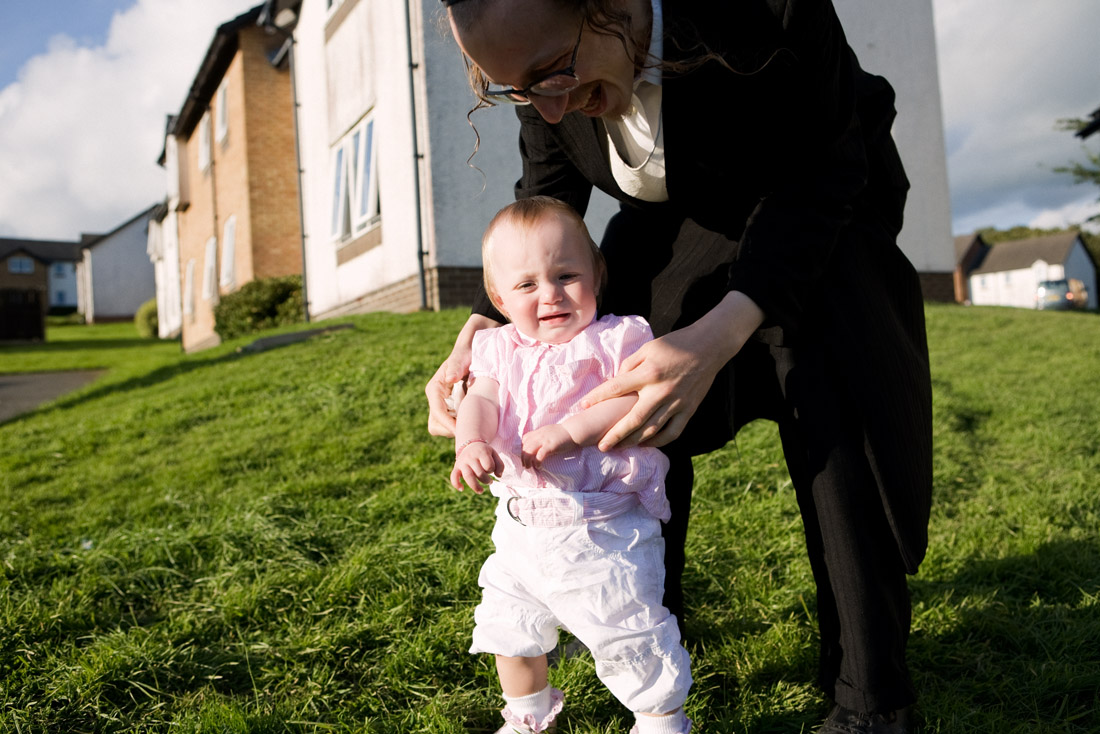 A young father plays with his child on the lawn of his rented accommodation. 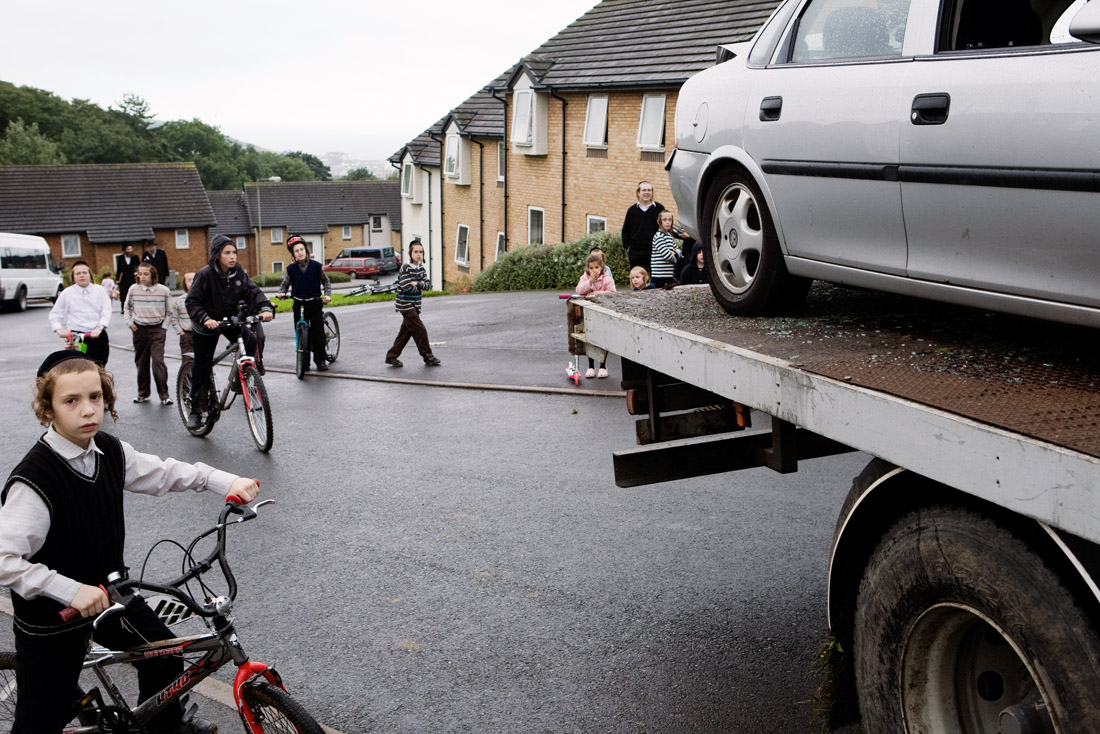 The campus is littered with bicycles, as the majority of children bring their bikes from home. If they cant fit in the car, they will be transported by the number of removals lorries that bring cookers, fridges and freezers full of food that will be used instead of those provided by the university. 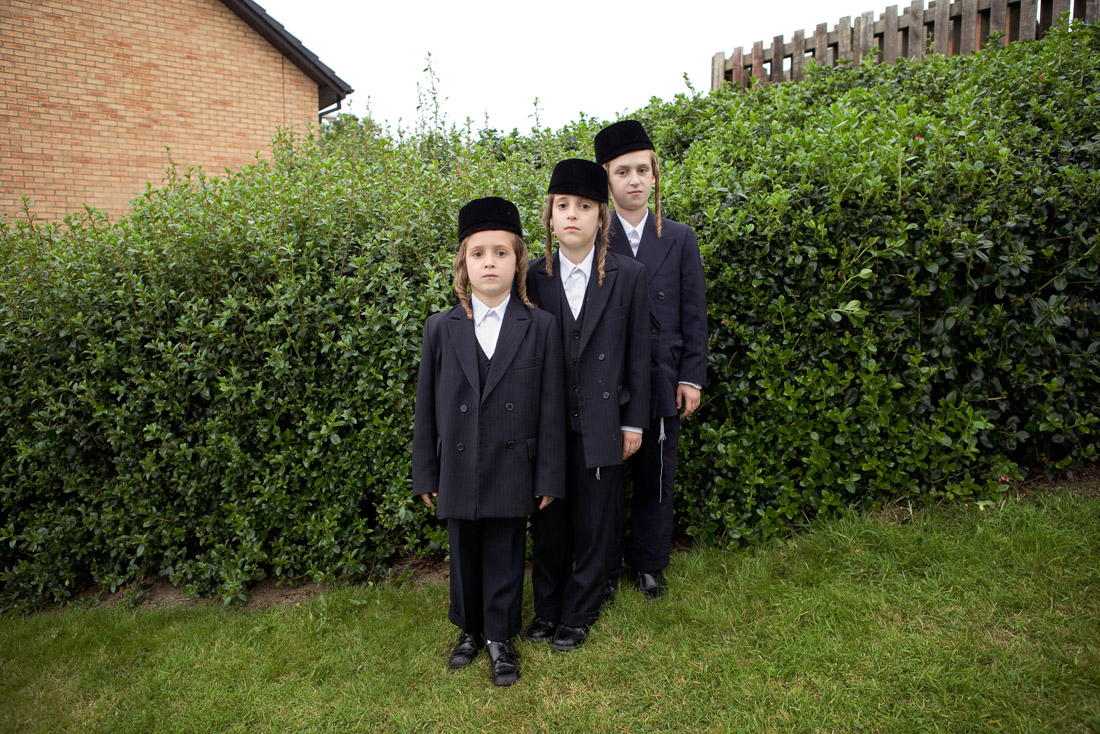 The Englander family, ready for dinner on Shabbat eve. 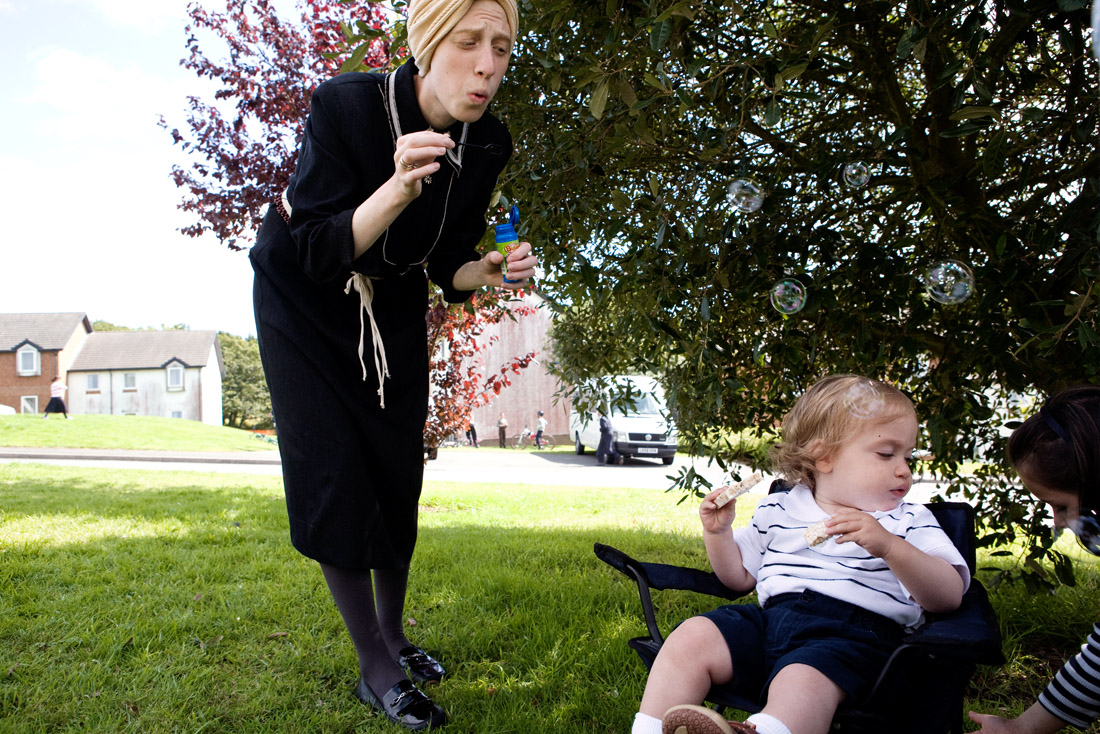 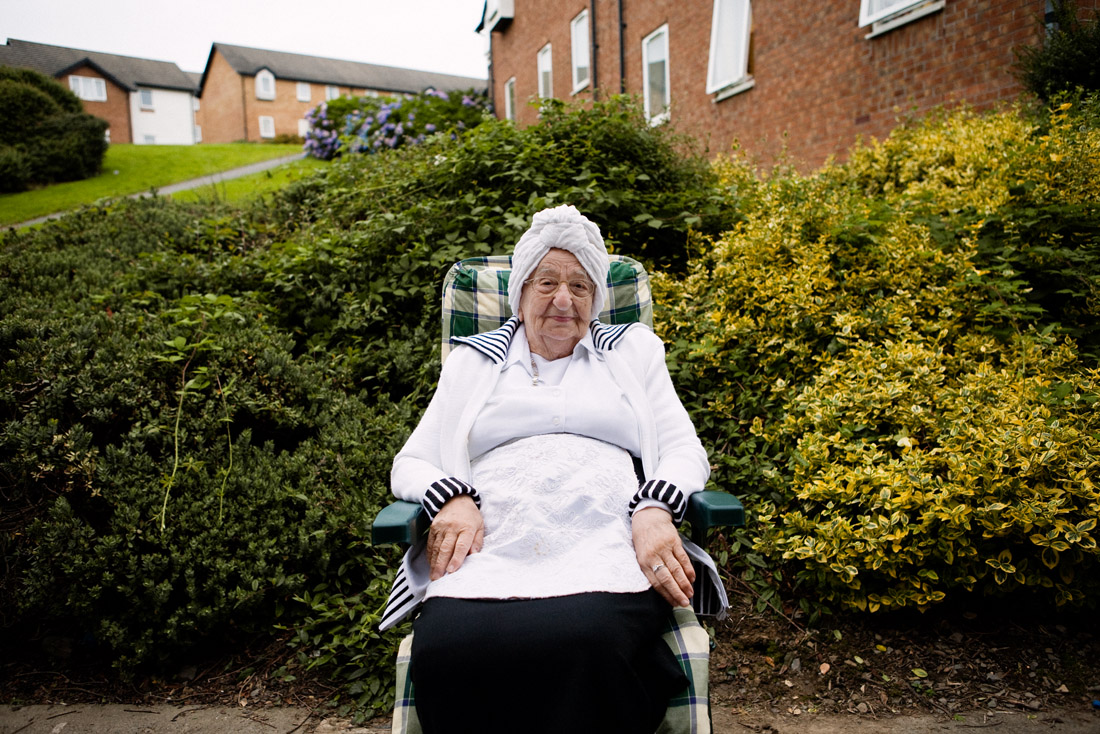 Mrs Taub: mother of eleven and grandmother of "endless children".