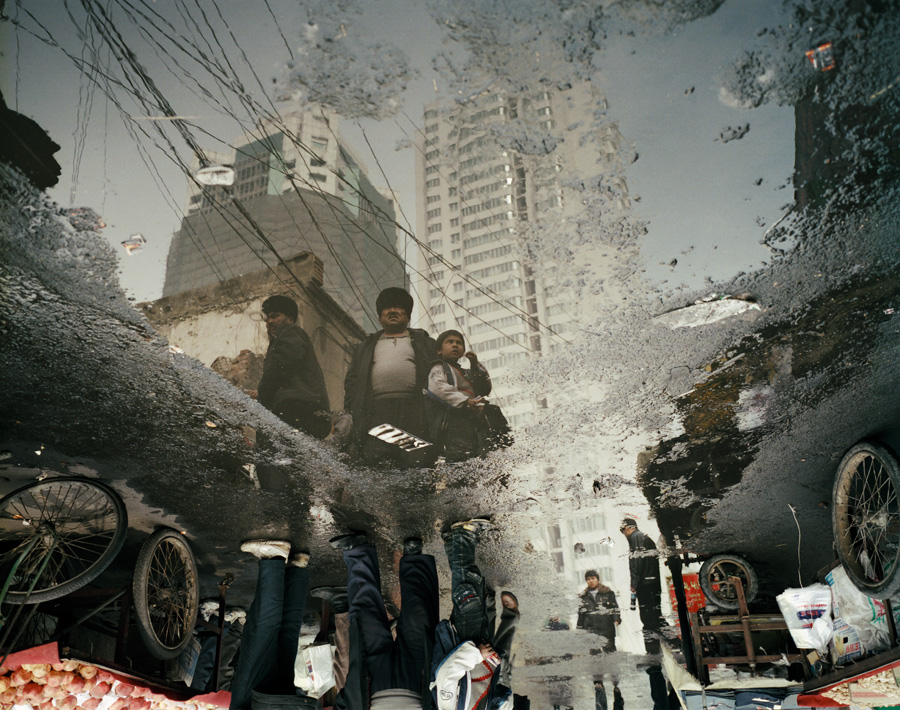 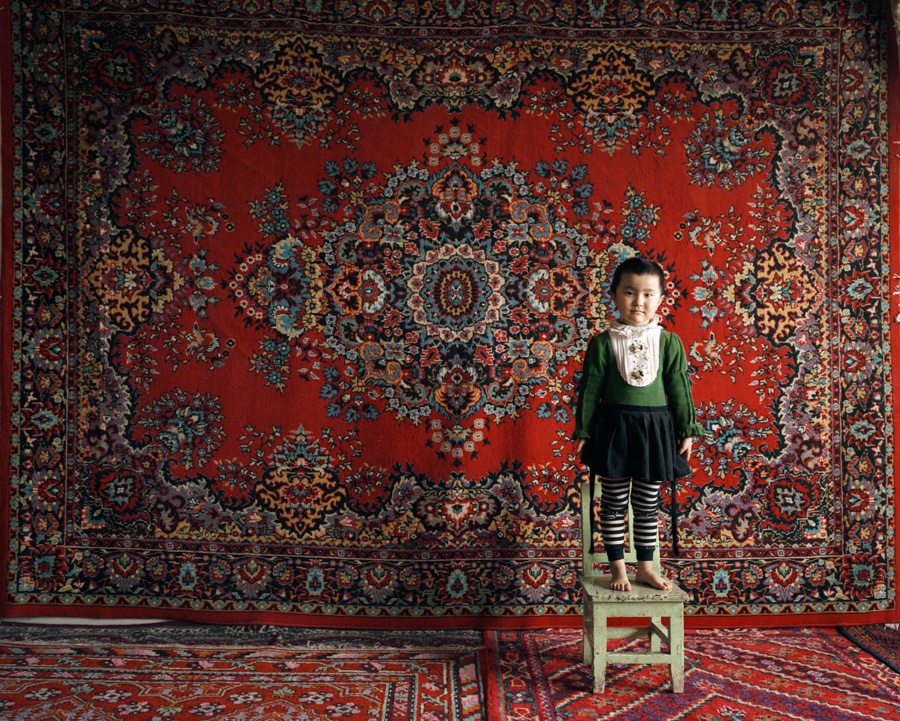 Thousands of miles inland, on China’s western frontier, lies a vast, sparsely populated region called Xinjiang. The majority of its inhabitants are Uighur Muslims, a Turkic people who have more in common with their Kyrgyz and Kazakh neighbours than with the Han Chinese who have colonised them. This minority is struggling to defend its culture and traditions as China continues to dilute its population through government led Han migration.

In China’s “Great Western Development Drive”, a campaign launched in 2000, Xinjiang and its natural resources were identified as crucial to China’s energy-hungry economy. As with similar policies in Tibet, the Chinese government offers economic incentives to draw Han people to these frontier provinces, ostensibly to ‘promote stability’ and encourage development. Decades of enforced migration have brought the Han population in Xinjiang from 5% in the 1940s to around 40% today.

Surprisingly, when launching the project in early 2000, the Chinese government drew comparisons between its strategy of development to that of the opening of the American "wild west" in the early 1900s. It even commissioned a detailed study of the "Take-off of the American West in the Early Decades of the Last Century." Today, China stands at the beginning of what many scholars predict will be the "Chinese century". It is believed that sometime within the next 20 years, China will surpass the USA as the world's largest economy. But at what price?

The influx of Han migrants has fuelled Uighur discontent as the two communities compete over limited jobs and resources. Escalating tensions have led to the imposition of a significant military presence to suppress what Beijing calls a growing “terrorist threat”. Not only are the the Uighur community discriminated against at work, but they now live under constant surveillance, with religious practice and freedom of movement strictly controlled by government representatives.

In July 2009, this simmering ethnic conflict boiled over into open violence as Uighur demonstrators gathered in the region’s capital of Urumqi. Street protests degenerated into mass riots with Uighurs attacking Han Chinese migrants who in turn retaliated. The Chinese police force then responded quickly and brutally. Hundreds of people, both Uighur and Han, were killed in the street fighting and in the proceeding weeks, countless Uighur men simply “disappeared”. In an attempted information lock-down, the Chinese government cut internet connections and limited mobile phone communication for ten months after the riots.

Today, the relationship between the Uighur community and Han authorities remains tense. Though Muslim Uighurs are still the majority in Xinjiang, they live under significant restrictions, limiting religious and cultural expression, as well as social freedom. In a land officially known as the “Xinjiang Uighur Autonomous Region”, the notion of autonomy is a hollow concept rather than a reality. 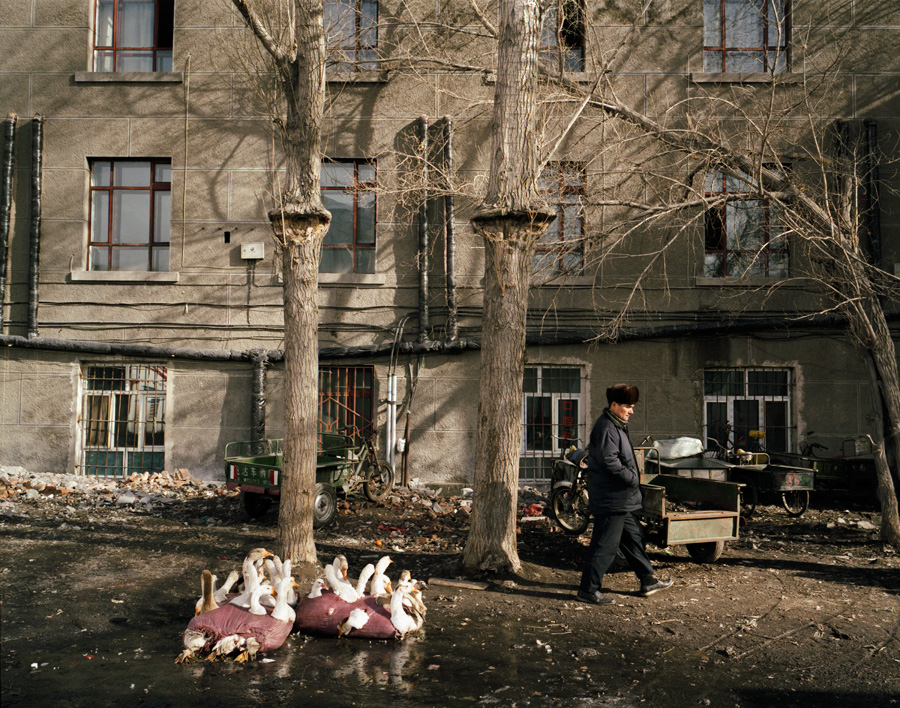 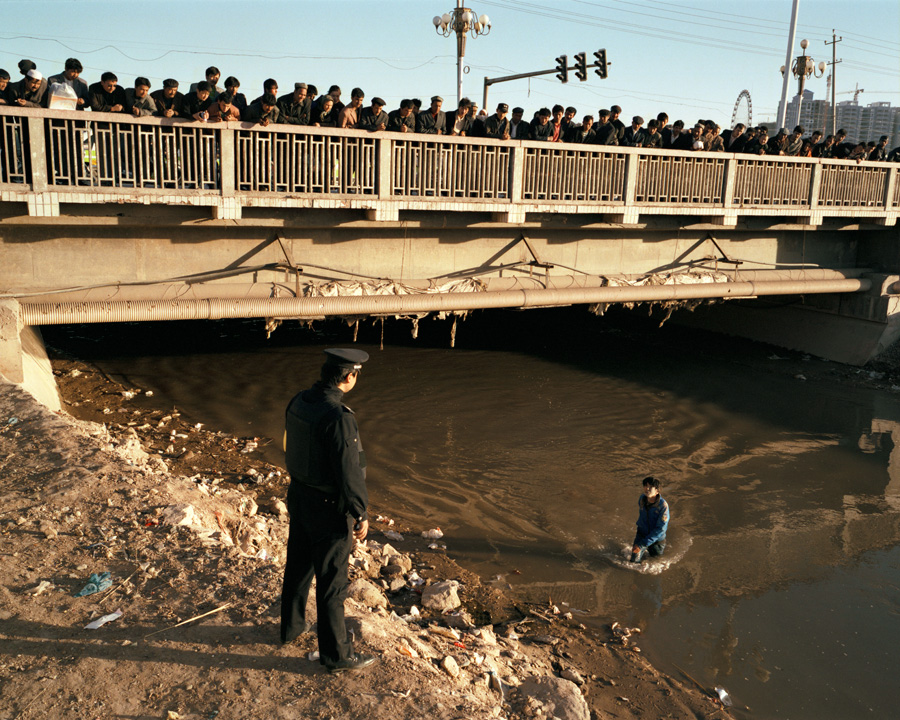 A crowd gathers at one of the main bridges in Kashgar. A Uighur boy has ended up in the river, claiming that a Chinese policeman threw him in. 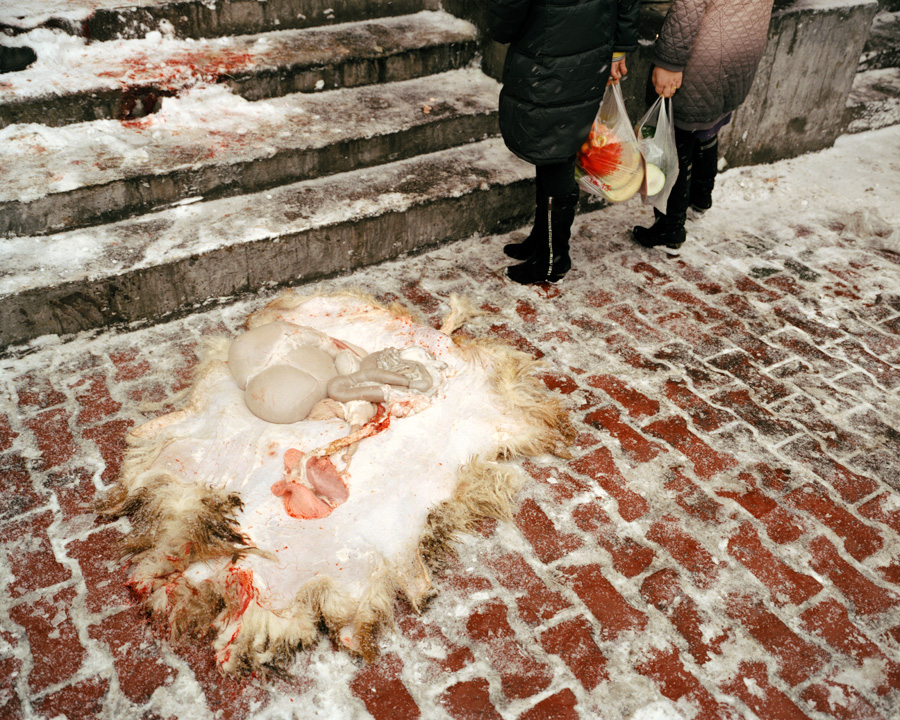 Outside a butcher's shop, a sheep's entrails lie steaming in the snow. 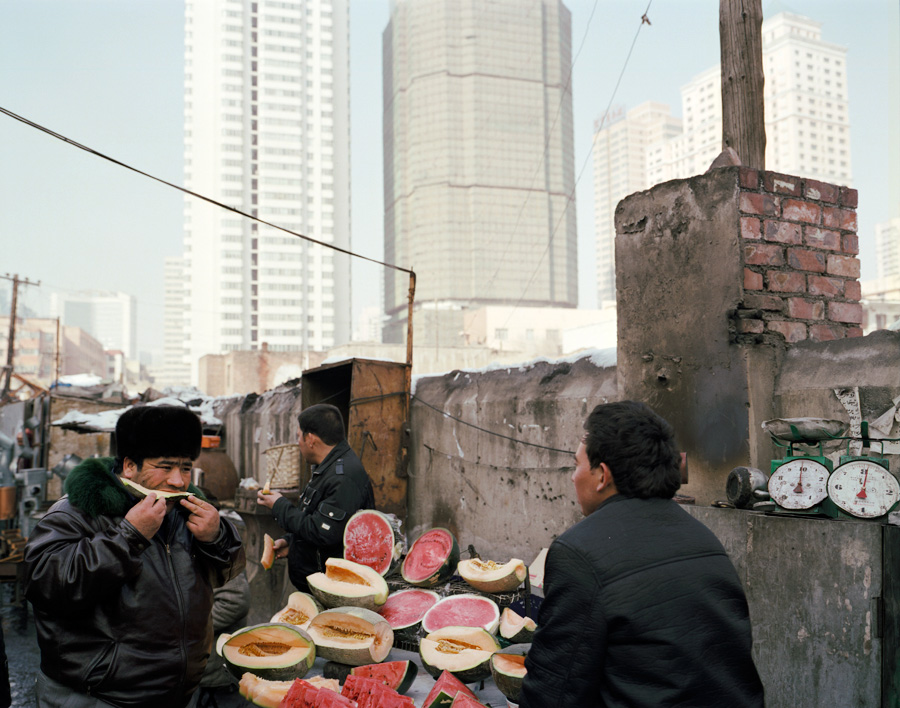 A melon stall, in the shadow of large scale Chinese development. 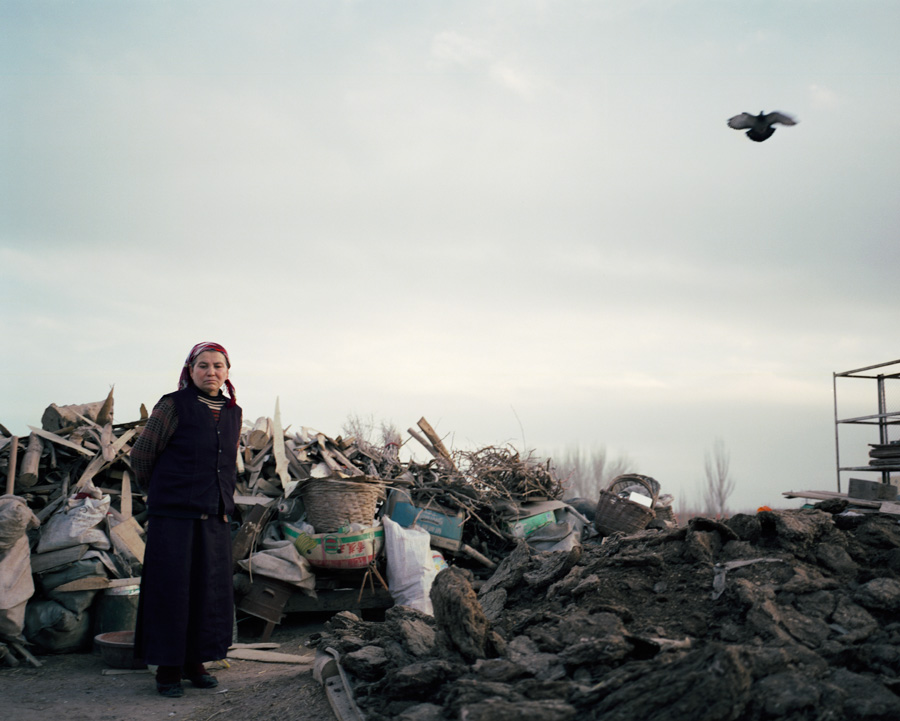 A Uighur woman releases pigeons on her roof and waits for their return. 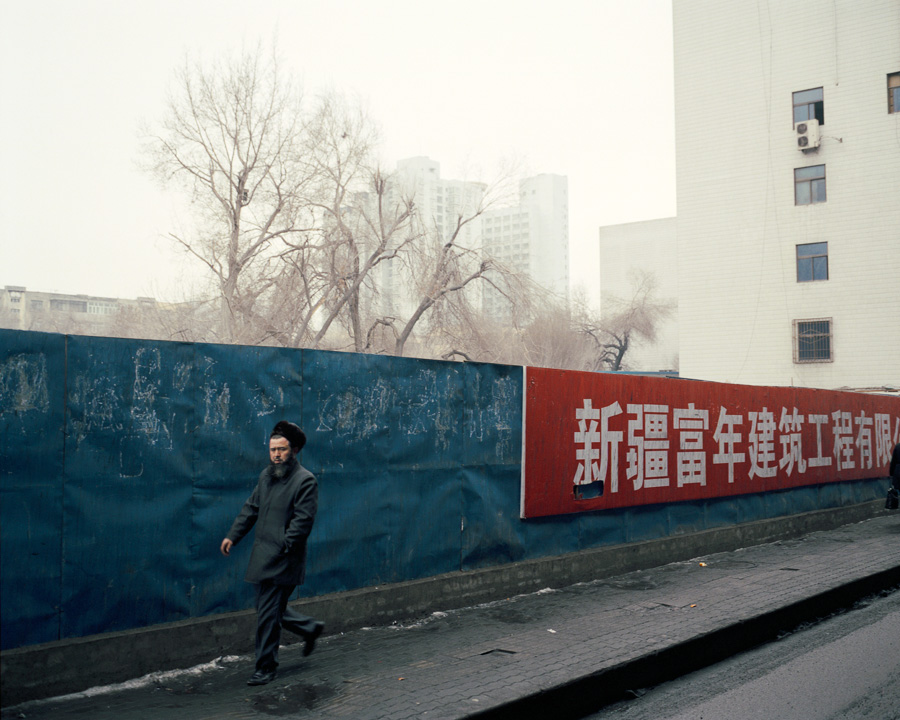 A Uighur man walks past a Chinese sign in Xinjiang’s capital, Urumqi. The Uighur community suffer from widespread unemployment, as many jobs require a high level of spoken Chinese, which most do not have. 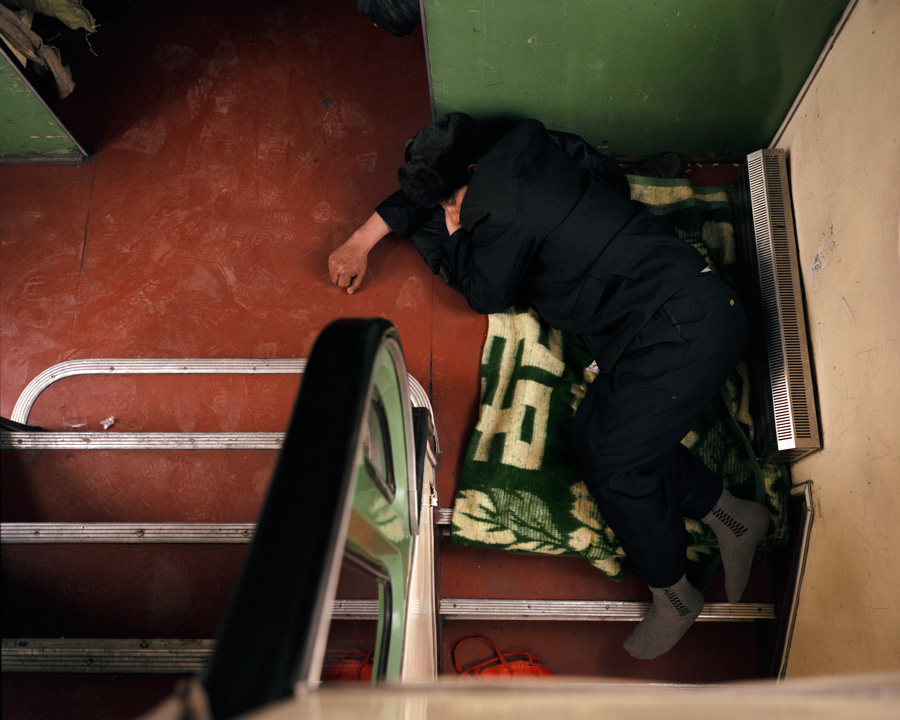 A Uighur man sleeps in the corridor of a train, returning home on a 33 hour train journey from Urumqi. He was visiting his 23 year-old son in prison, who was arrested for selling Islamic DVDs in their local market place. He was sentenced to 15 years in jail as punishment. 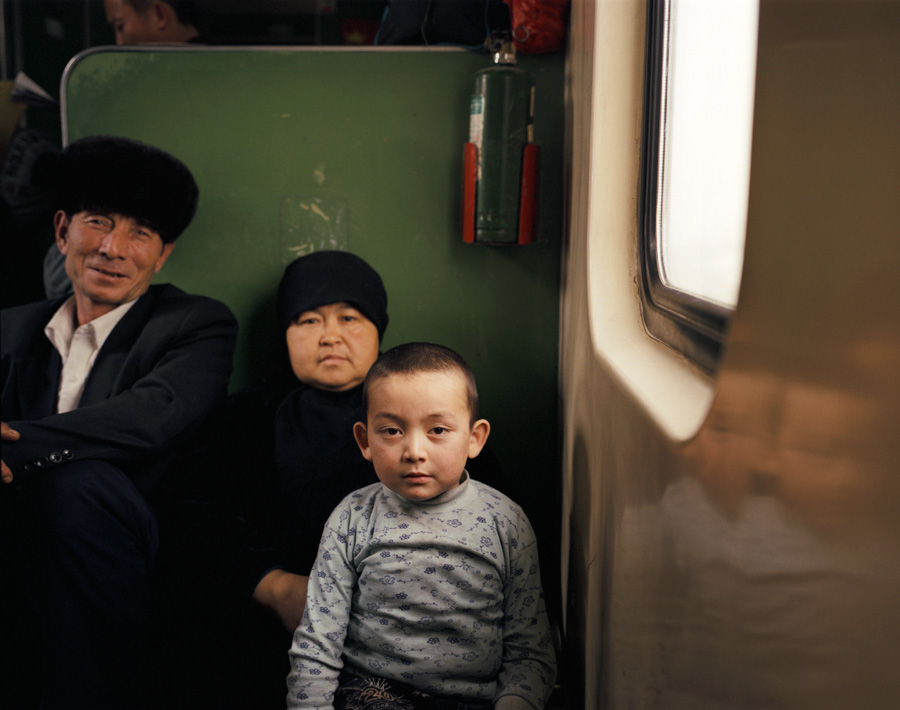 Abdul Aziz with his grandparents, returning home after seeing his 23 year old father in prison. This is the first time they have been able to visit him, as during the initial three years of his sentence, the family were not allowed to see him at all. 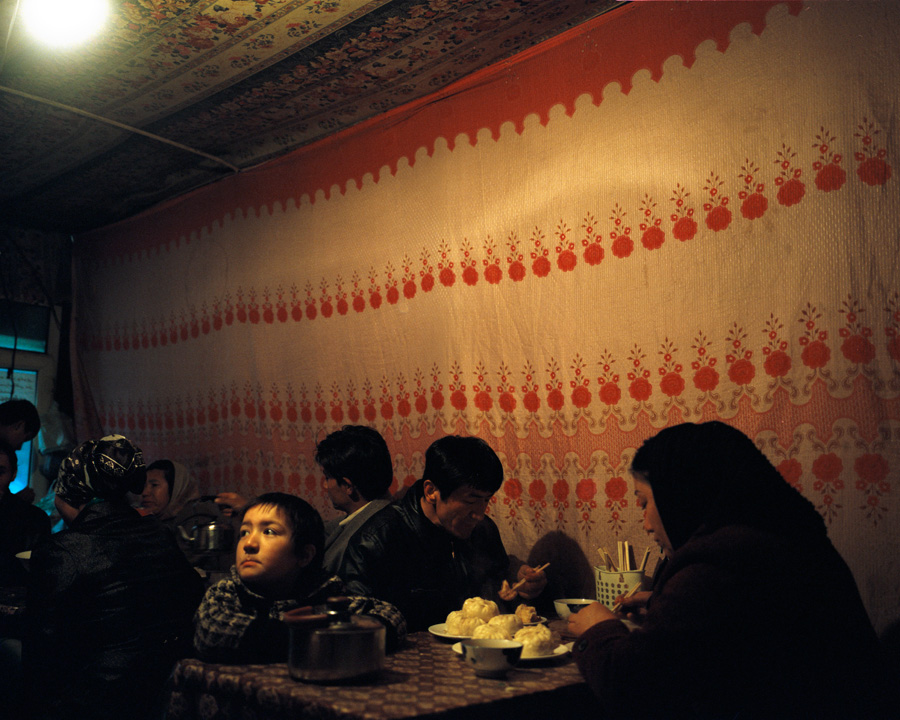 An Uighur family eats lunch, while they shelter from the falling snow. Grand Bazaar, the Uighur quarter, Urumqi. 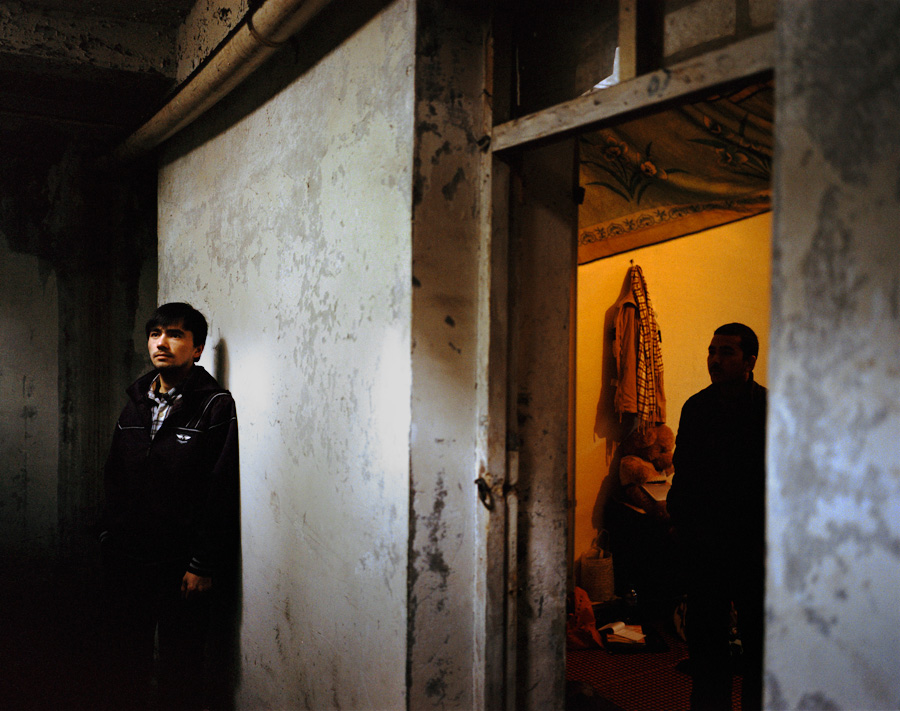 Two Uighur students move house to escape the constant threats of their previous Han Chinese landlord. They will be sharing one double bed between four boys, with a communal bathroom three floors above and no kitchen. They say anything will be an improvement from their last place. 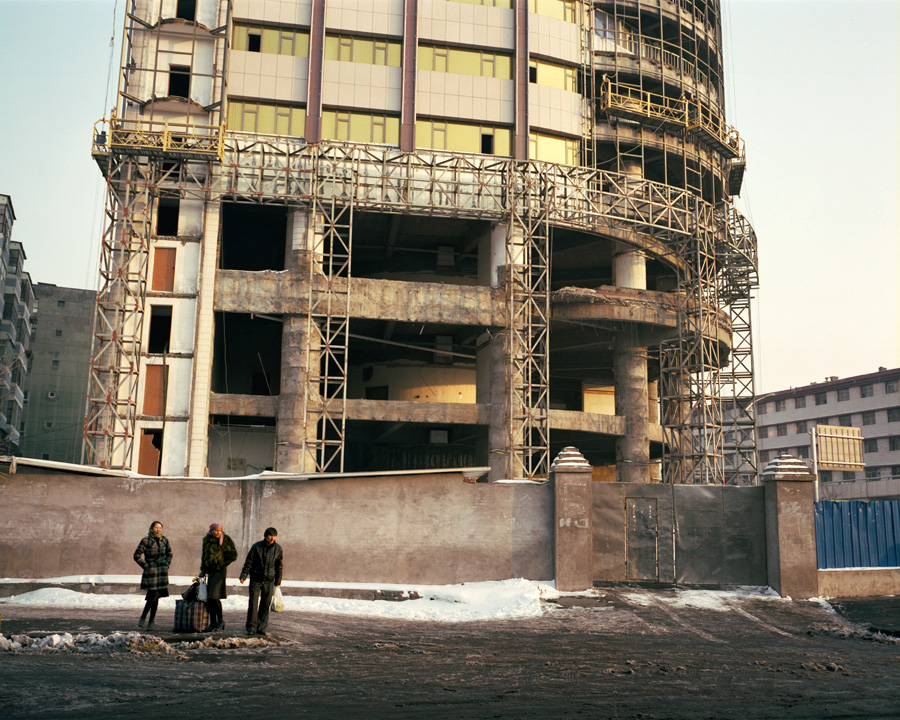 Three young Uighurs wait for the bus, in the shadow of a new Chinese development. Grand Bazaar, the Uighur quarter, Urumqi. 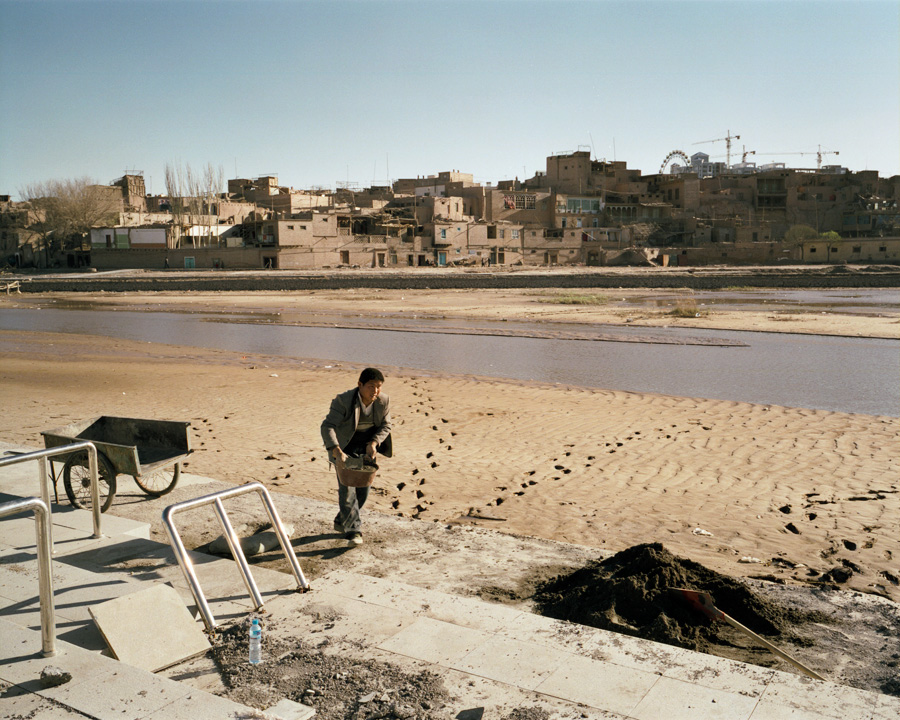 A Han Chinese labourer installs metal railings on the modern waterfront in Kashgar’s old town. Growing job opportunities have brought a steady stream of Han migrant workers to the region, causing Han population in Xinjiang to rise from 5 percent in the 1940s, to around 40 percent today. Whilst Han settlers arrive, Uighurs are sent to work elsewhere. 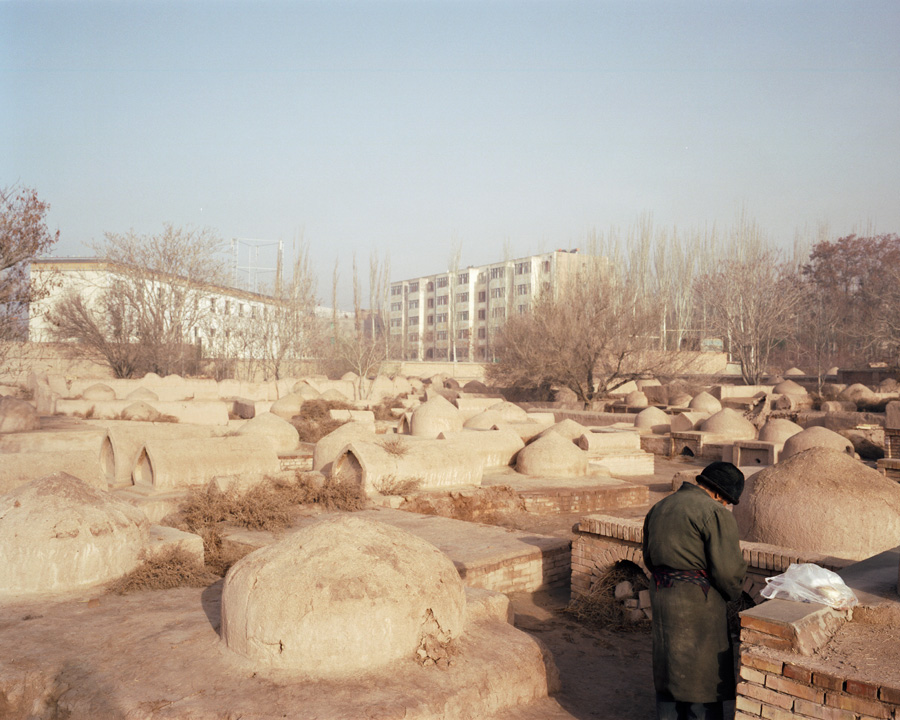 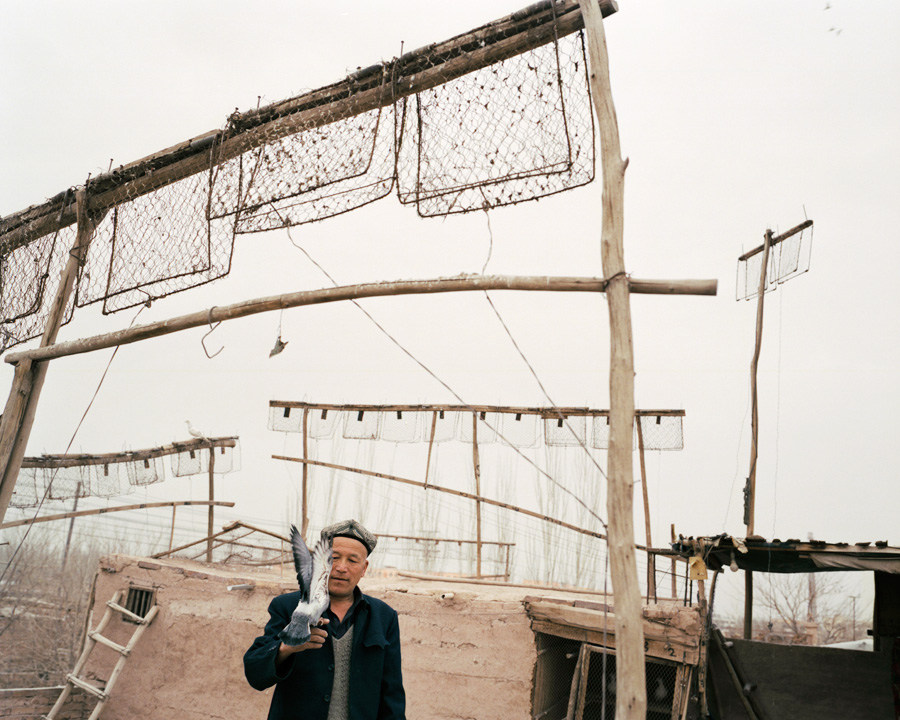 Materimahun started feeding and collecting pigeons when he was fourteen years old. Known as 'pigeon-fancying', the tradition is long-standing within the Uighur community. This practice, along with many other Uighur cultural expressions, has become endangered, as the Chinese government demolish much of the traditional Muslim housing, with flat roofs and courtyards, to make way for modern buildings. 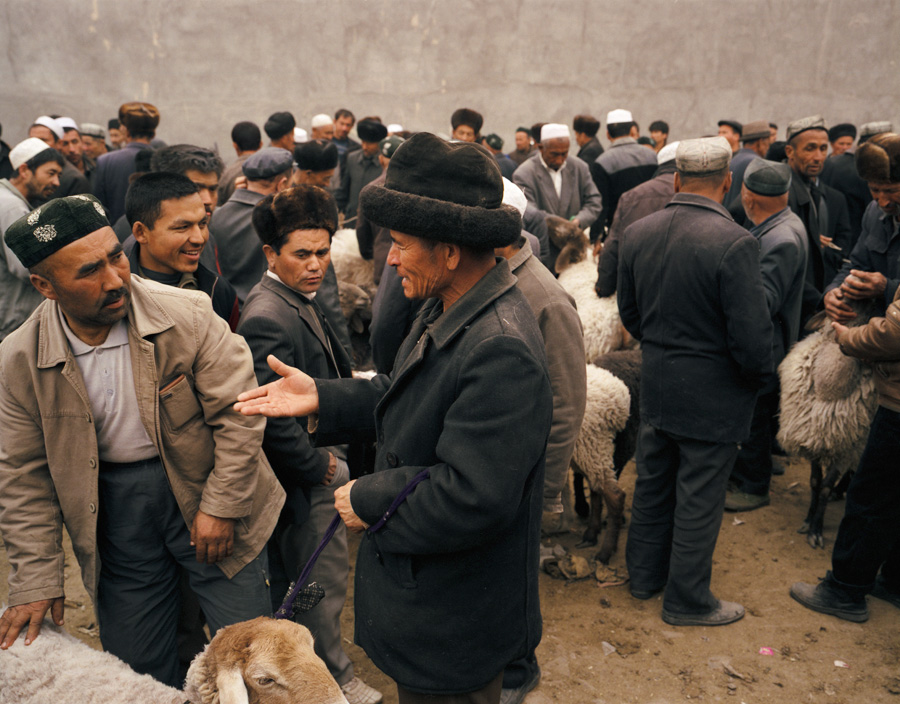 Uighur farmers trade their cattle at the Sunday market in Artux. For centuries the oasis towns of Xinjiang were used as stopping points along the Silk Road, leaving the region with a unique cultural legacy. 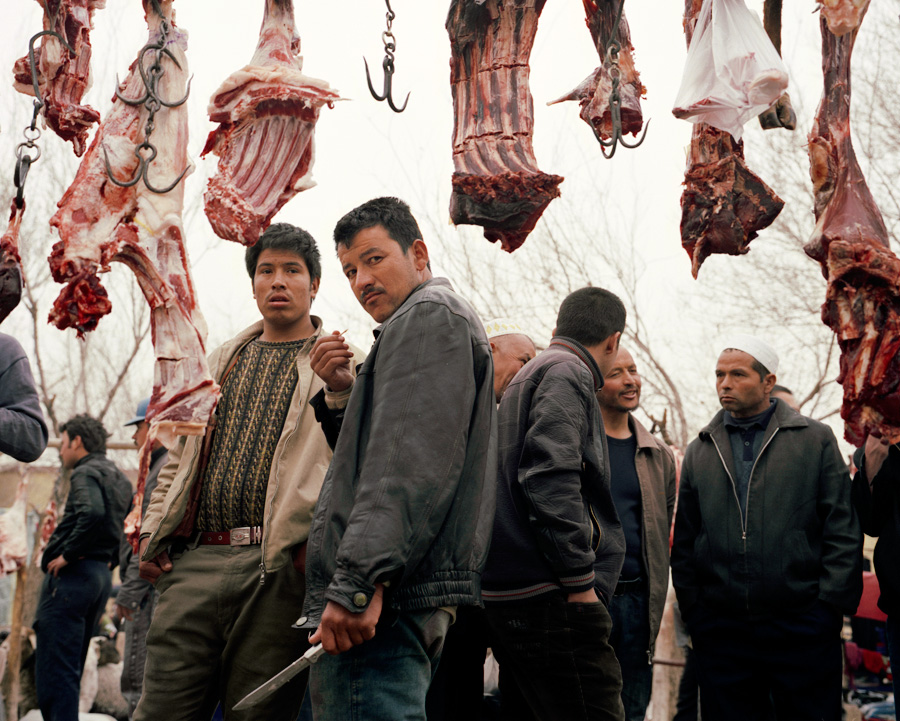 Mukeddes is five years old. She lives with her grandmother in Kashgar. The Uighur people believe they are indigenous to the area, with their ancestors arriving from Mongolia in the 9th Century. However the Chinese classify them as a National Minority rather than an indigenous group, meaning that they have no rights to land under the law.